As far as puppies are concerned, the absolute worst thing in the world happens when they are 2 weeks old; they are wormed for the first time.  At the next worming the puppies will be 5 weeks old and will happily lap up the liquid wormer added to some yummy scrambled eggs.  But at 2 weeks old, the only way to get it into them is to squirt it directly into their mouths.  And it tastes bad.  Really, really bad.  As you can see. 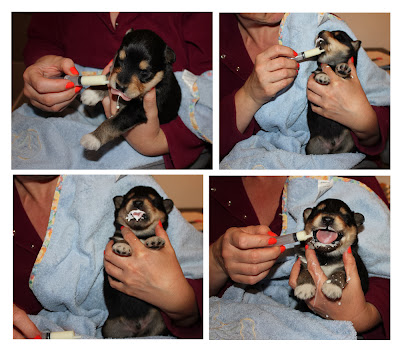 Puppy milk before AND after - spoilt puppies! ;-)

Yes, you can tell by the expression on their faces how spoilt they are lol. Poor puppies!