and as for the garden

This weekend we're off to Surrey for a whirlwind visit to join the festive SFLS Lapphund walk and, perhaps, more importantly, to filch a few plants from Jay's green-fingered mother in an attempt to fill some of the vast empty gravel pits currently gracing the patio edges. Now, if only she was so inclined to come for a visit with trowel in hand... no, I'm just kidding - of course I would never - don't be ridiculous, of all the... etc.

In case you missed it, early shots of the work (and the rather excitingly coloured digger) were posted here. For comparative purposes, here is a particularly unflattering shot of the garden just as work was starting, and after the gravel path through the middle had been hoovered up. I think you'll agree it's more than ready for a makeover. 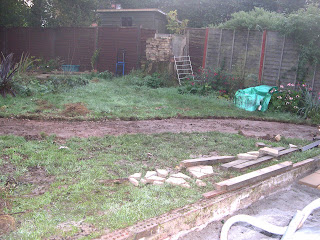 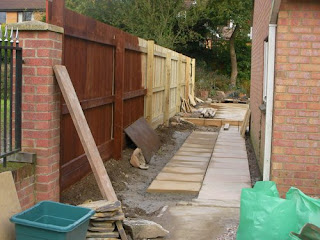 Once the fence was up I started painting. Having spent far too long (dashing out, paintbrush in hand, between rain showers) doing this little bit, I decided I didn't like the colour. It was going to be way too dark. I'd lived, literally, in the shadow of that monstrous hedge for long enough that I didn't want anything dark and gloomy about my fence. I certainly didn't want to undo any of the new, spacious feeling of that path down the side of the garage. Compare this path to the old one (post-hedge but before the hump was removed). It was downright claustrophobic: 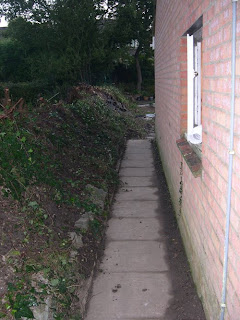 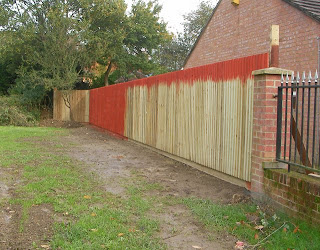 And, so, off I went and got a much better colour, although it has to be said that it started out as a rather alarming shade of orange until it dried. I figured it would mellow with age. Oh, but what a lot of fence there was to paint! This little section was the result of one entire can of paint and rather too much effort, frankly.

Then Tony told me about the spraying machines, which I thought might cost a fortune but which actually turned out to be quite affordable and, in the end, extremely cost-effective. It's quick, the paint goes further, and is cheaper per litre. Result! In the amount of time it had taken me to do that little section, I had the whole thing done.

This is how it all looks now. 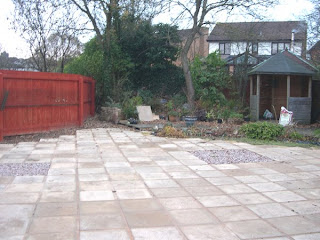 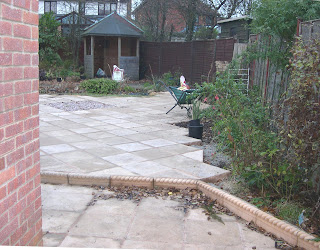