Back along before I got distracted by seasons, progesterone testing and trips to France, the brothers Usko & Kallio had their very first show at Darlington. As, of course, did their owners Ian & Liz and Nicole & Charlie. Although it meant rather more driving than I would like, I had to be there to cheer them on.

No one was more shocked than I to see that Usko's "little" brother Kallio had not only overtaken him in the size department, but looked about a month more mature as well.

Handled by yours truly, Kallio went into the showring and didn't have 4 paws on the ground at any one time. And he flatly refused to let the judge come anywhere near him - he thought it was a great game! And that carried right on through winning best puppy in breed and going into the big puppy group ring. As they announced the Finnish Lapphund, before all the spectators and cameras, Kallio hobbled across the ring on 3 legs. Not only did he refuse to walk properly on his lead, he decided he needed to have a good scratch as well and thought he could do so while on the move. Oh, so funny!

Usko, on the other hand, behaved impeccably for Ian & Liz's first real show with him. All those hours of ringcraft classes paid off - Usko behaved like a perfect little showdog in the ring, trotting around beautifully with Ian and standing nicely to let the judge go over him.

I'm sure all the exercise before going into the ring helped. Here are the brothers enjoying their reunion. 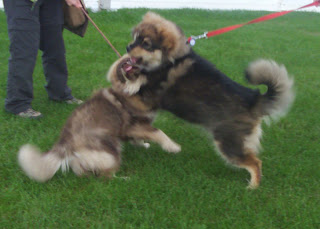 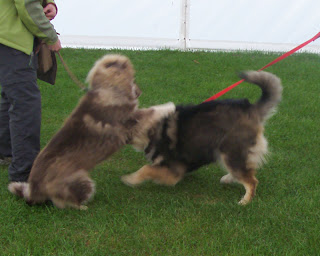 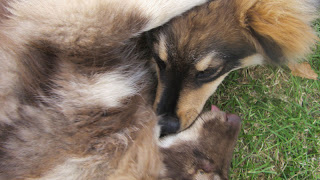 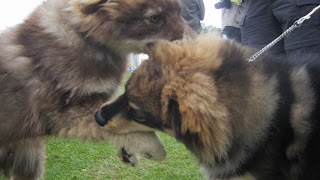 Not only was Kallio bigger than Usko, but he was almost as big as his very big uncle Taito. 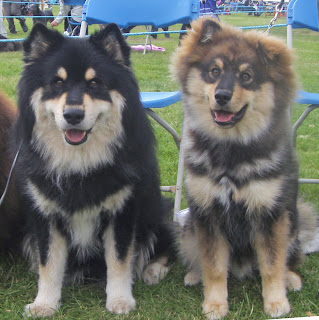 Seeing Usko & Kallio together reminded me so much of seeing Taito & his brother Karhu together at their first show at 6 months of age. Taito, like Kallio, was quite mature while Karhu was like Usko and still looked very much the puppy. Here they are in the ring at the Manchester show 2007. As you can see, their ringcraft has come on quite well since those days - proof that there's hope even for Kallio! 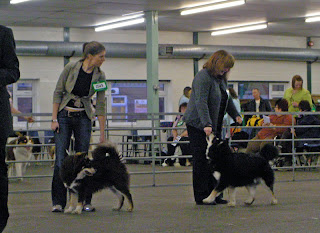 2 years on and Karhu has grown right up. At Darlington he went on to win Best Rare Breed in the very last Rare Breed competition that Lapphunds will participate in. Next year we will have challenge certificates and so the fun we've had over the years in Rare Breed classes with the Estrela Mountain Dogs, Pyrenean Sheepdogs and the like will come to an end.

I had some photos of Wendy & Karhu winning Best Rare Breed, but I can't find them at the moment - very frustrating, but not unexpected considering my, er, compromised organisational skills these last few weeks. If you're out there Wendy - please send me some more. 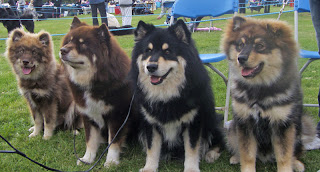 
Many, many thanks to Scott, Charlie and Ian (& possibly Liz) for the photos. Without you I would have had none at all.
at 07:00 1 comment:

Those who check in with the website from time to time will probably have spotted that for some time I've been planning a liaison between Keksi and a mysterious French gent. Well the time finally came and Keksi and I set off on our aventure française together.

The object of my affection was this adorable boy, Lapinlumon Kuuraturkki, known as Elias: 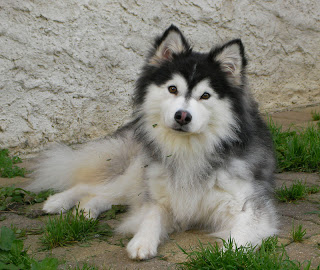 As it happened, Keksi's affection was rather more inclined toward the cream sable puppy BjØrn. He, bless him, had no idea what her intentions were and would attempt to play then flip onto his back. Eventually Keksi came around to the idea that Elias wasn't so bad.

I was expecting the visit to take a few days because I knew we were, in fact, a tad early in Keksi's cycle. You might wonder why go through the effort and expense of progesterone testing and pre-mate testing at the vet if I then ignore their advice that she's not yet ready and go ahead anyway. However, I was using a third method of ovulation prediction as well. Between that one and the results of the other two tests, I was pretty sure I knew what was going to happen when. What I couldn't predict was what days the French workers would be striking.

When I got the email from Brittany Ferries telling me that my ferry to Caen had to be rerouted to St Malo due to industrial action I didn't have my normal reaction. Normally I would take that as a sign that Keksi was not ready, as suggested by the tests, and that I was being given the opportunity to save some money and wait until after the strike to travel. Instead, I decided to take it as a sign that my travelling to and/or from France might be tricky and so I should just get there and worry about everything else once I was safely ensconced within driving distance of the Kennel Des Royaumes du Grand Nord. So that's what I did.

In the end I think things were a day or so later even than I was expecting, but with a bit of rearrangement of travel plans and similar jiggery-pokery, we got what we went for and now we wait to see whether this sweet couple will produce any puppies for us. 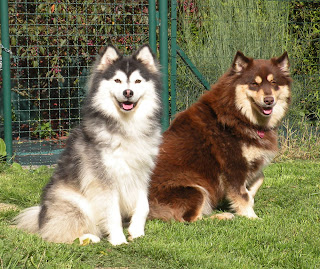 Elias wasn't overly keen the whole time, either - he knew when she was ready and when she wasn't. 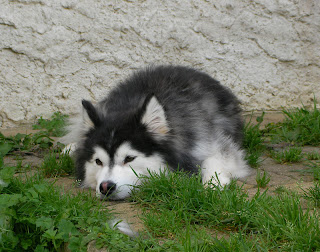 While we were waiting there was plenty of time for socialising, trips to visit the ponies and to the beach. 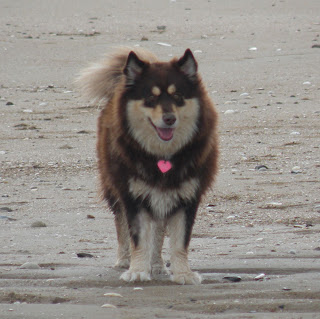 I can't thank Stéphanie and her family enough for their generous hospitality - not to mention the amazing pink peaches that I carried home with me from Madame Dubois's garden. I hope Elias didn't mind sharing - never have I seen a dog enjoy fruit so much! He would hear a peach fall from the tree and off he would go to retrieve it and quickly devour it. He had an additional stash of them piled in a little den under a shrub. There were moments when we wondered whether he was more interested in the fruit than in his girlfriend. But luckily he had sufficient attention for both.

And so now we wait.