No, I don't actually think that getting a puppy as a birthday present is a good idea.  In fact, I think it's a bad idea.  Puppies are not presents - they are carefully planned members of the family.  Would you adopt a child as a present?  Of course not.  So there you go.

But today, on the 8th birthday of Neka's first litter of puppies, I had confirmation that one of the daughters of one of the girls in that litter is in whelp and we have puppies on the way in about 5 weeks.  Little Neka great-grandkids, courtesy of Emmi.

A couple of months ago Emmi's season coincided with a sudden, unplanned trip to Surrey - such convenient timing!  But in this instance the timing was actually perfect as Emmi was on her way to meet her beau Ch Lecibsin Salo of TabanyaRuu JW ShCM.

We were thrilled and very grateful when Liz gave us the opportunity to have puppies from her special boy and everything has been crossed since then.

It was pretty early in Emmi's season, but it was love at first sight and although I thought it should be too early for her to be mated, the two lovebirds were both convinced the time was right.  As usual, the dogs knew better than the humans. 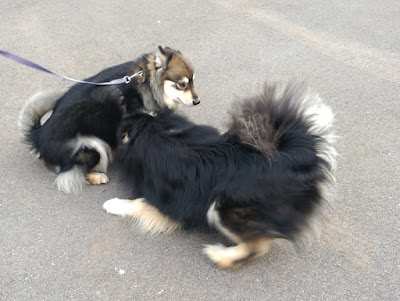 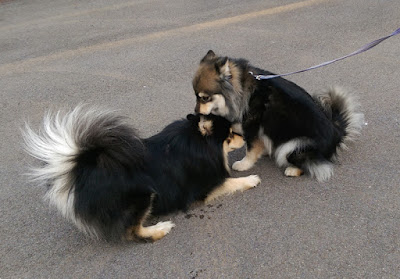 And so without delay or kerfuffle, the deed was done.  And done again the following day.


In addition to the quick visits for mating, there was also time for some old fashioned fun out walking.  And if you're wondering why Emmi was off lead at such a crucial point in her season, we were walking in an area where I could see far into the distance and we were quite alone.  And fortunately Emmi is never one for running off. 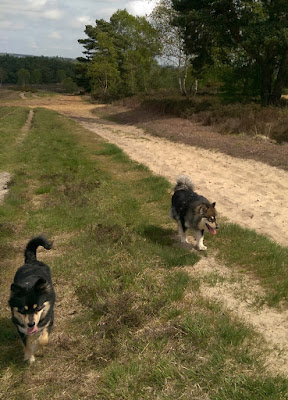 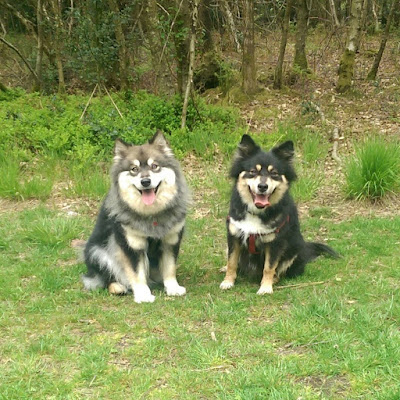 Usually I really enjoy the Southern Counties dog show.  Usually we have a Finnish judge and no one can ever predict what choices will be made on the day.  It's usually great fun and we usually have a terrific turnout.  And usually the sun shines on us.

Yesterday all that was true again ... apart from the sun bit, that is.  It was cold, it was wet, it was crowded in the tent.  But still a good day for team Infindigo, overall.

Our judge was Harri Lehkonen and first up was Tito in the big Postgraduate Dog class.  At only a month out of Junior, I dare say he was the youngest in the class, so I was especially thrilled when he placed 3rd out of 8, qualifying for Crufts 2016.  And hot on his heels in the same class was Kuura, shown by Jane and placing 4th.  Kuura & Jane then went into Limit Dog and placed 4th again.  So proud of my boys!


I should take this opportunity to point out that despite appearances to the contrary, I was not actually wearing baggy men's Y-fronts over my trousers.  Truly I wasn't.

Next up was Taika in the mixed Veteran Dog or Bitch class.  I took Taika to the club show last month, and that was the first show she had attended in .... I don't even know how long.  But the time can be counted in years rather than months.  And plenty of them.  But once a showdog, always a showdog, and she was a little brown star, placing 4th out of  a big class of 8 and beaten only by 3 champions.  You go, old girl!

Next came the biggest class of the day, Postgraduate Bitch, where the total of 9 competitors included Emmi, Talvi, Kiittaa and Jaana.  We were all thrilled when Emmi took 2nd place and qualified for Crufts and Talvi took 3rd.  And then they both went into the Limit Bitch class and did exactly the same thing again.  Super proud of my girls too.


Apparently the judge didn't like the creams - he binned every one of them, including Kiittaa.  For Lexi it was a completely novel experience not to place.  Never mind, we thought she & Kiittaa did a great job anyway.


As Mark was pressed into service showing Jaana, photography for the class fell to me, which explains why the pics are not up to their usual standard...  But after a little emergency ringcraft from Jane, Mark did a stellar job of showing the tiny brown dog and she actually looked more or less like a showdog.  Perhaps for the first time.  Can it be that she's growing up just a little?  I particularly love the shot of her looking straight at me, wagging away.  Hopefully that doesn't count as double handling (which, in case you are not aware, is strictly forbidden).  I wasn't actually trying to attract her attention.

You can visit Fosse Data's website to see the full list of Southern Counties results.
at 13:50 No comments: