So Becca & I set off for the Three Counties show. It was a wonderfully warm, sunny day with a slightly blustery wind. Perfect dog show weather. Never mind that by the time we got into the ring, an enormous black cloud full of rain had swept down the Malvern hills on a ferocious wind and sent dogs, exhibitors and judges scurrying for cover in the sheds and tents with all their various stuff.

Now. Didn't I firmly vow to take the posh camera to this show and properly record Tippi & Ukko's first foray into the showring? Er, yes, I'm pretty sure I did just that very thing in my last post. Well, with no Jay on hand to mind the valuables, I thought it best to leave that particular camera at home. But surely I brought the other, good enough if not very great, camera along, right?

Er... um... enough with all the questions already! Dead battery, yadda yadda yadda. Best we concentrate on the positive. What it comes down to is that I have a few photos of Ukko that Becca took with her camera and a few truly dreadful ones that I took on my phone. Better than nothing? Hmmm, maybe.

Here they are waiting in their crates like a pair of very well behaved puppies before all the excitement of getting brushed and ready for their big debut. 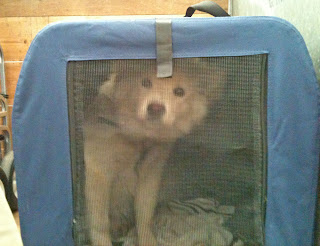 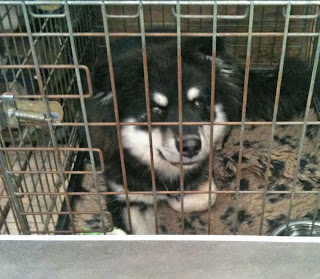 First up was Ukko's class and I took him in because Becca was positively green with nerves. He did his trot round the ring exceptionally well and was very good indeed about letting the judge go over him. He was even happy to show her his teeth. As for standing, well he wasn't too sure about that, but by the end of the class he was really getting the hang of that too. 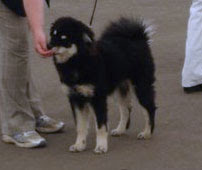 Anything for a slice of sausage 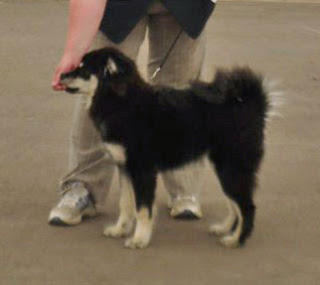 While I got Neka ready for the ring, it took surprisingly little persuasion for Becca to take Ukko into the puppy stakes class. He was so well behaved and did her proud on Becca's first ever time in the ring as well. 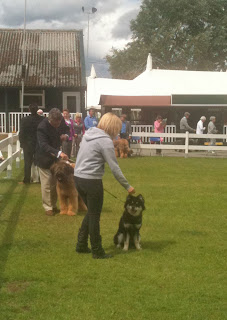 
In the meantime, Susan was in the ring with Tippi while me and my terrible phone camera were standing further away than ever. 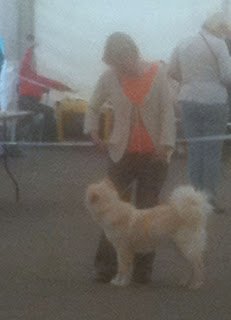 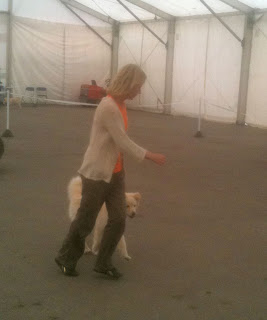 Tippi was a real pro at standing, and she also trotted beautifully around with Susan. Unfortunately she was determined to get at the treats without letting the judge anywhere near her. After the judging I took her around to a few strangers for some practicing and she let them go all over her with no problem at all. It's just a matter of getting her accustomed to the new situation and I'm sure she'll be fine.

Our judge was Mrs J P (Ginty) Gill-Davis and I must say she was so nice with the puppies. Judges tend to vary rather a lot in terms of their patience with - or, in some cases, even interest in - puppies. Mrs Gill-Davis was so patient with them, and very gentle to make their first experience a good one.

So we didn't take away any big prizes from this show, for obvious reasons. The puppies, as you can see, are so very immature - what is known in dog show parlance as "raw". They are skinny, leggy and with very little in the way of coat. However, we had a lovely day and the puppies had fun and games with lots of treats, so there can be little doubt that they considered themselves big winners.
at 15:20 No comments:

It was a strange show this year. Strange in the way that it felt so... relaxed, so calm, so relatively quiet. I wasn't the only one who noticed. I think the difference from previous years was down to the change we have had from Rare Breed status to Challenge Certificate qualification. Historically, Southern Counties was always one of those shows where we all dashed from breed ring to rare breed ring to stakes ring and back again. This year, the show layout was different (and better) and on top of that we no longer qualify for Rare Breed classes. So it was all very much less hectic than in the past.

Also different from past shows was the rain we managed to get caught in just after judging. But we can gloss over that bit, as it did remain more or less dry for our actual judging. What happens on the way to packing up the cars is apparently of little concern to the rain gods.

It was Keksi's first show back after her puppies. She doesn't have her full coat back just yet, but what she does have is rather plush. Here she is wondering if she will get the sausages any more quickly if she does maximum head twist & rotation. Funny girl. 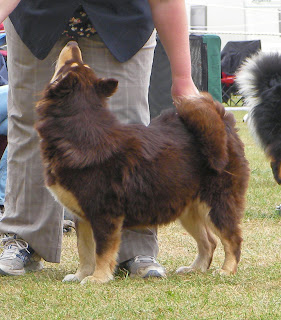 Maija was also in attendance and we got her up on the grooming table together with her sister Inko and brothers Tarkka & Rauhan for a family portrait. They are almost never in the same place at the same time, so it was a fabulous opportunity. Unfortunately my rubbish, rubbish, rubbish old camera didn't manage to capture even one of the 3 dozen shots I thought I had taken. That will teach me to leave the posh camera at home. It's in the dog bag already in preparation for next weekend's show.

The grooming tables otherwise getting full use with Rauhan (top) and Tarkka (bottom), who is looking not overly impressed at having his tail area brushed. 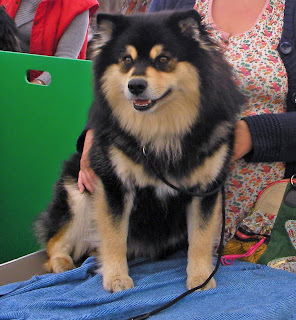 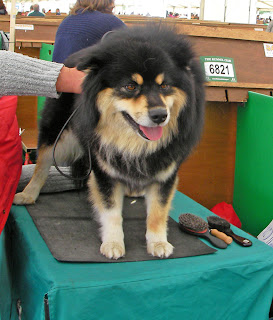 For all this brushing, I must say that the Infindigo team looked rather lovely, especially considering how quickly the dogs all seem to be dropping their coats in the current spell of warm weather. Er, with the possible exception of young Usko who, at 15 months old, is at that age where he's in the throes of losing all the lovely coat he has been growing since puppyhood. All this is in preparation for his adult coat which should be coming in over the next few months. 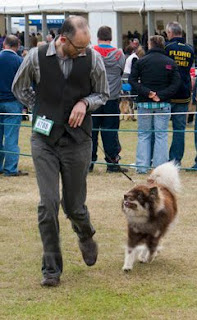 Excellent teamwork from Ian & Usko!
Thanks to Mark Treasure for the pic. 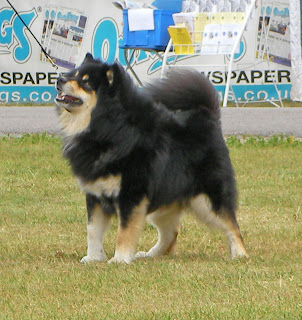 And Inko who was the star of the day, winning the Postgrad Bitch class in tough competition. And I heard with my very own ears that Paula & Adam didn't even expect her to qualify for Crufts this year. Egad, they of little faith, whatever next! 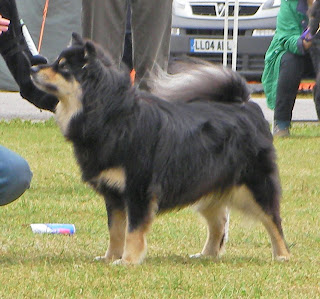 And so next weekend sees the Persikka puppies' show debut. Although Marja won't be there. And Sisu certainly won't be coming down from Scotland. Or Bo. Oh, and Daniel forgot to enter Kuura. However, if the gods see fit, then Becca & I will be there with Ukko and we're hoping to see Tippi and family too. I'm looking forward to a most entertaining day.
at 15:00 No comments:

If you've dropped in on this blog more than once or twice, then you've probably seen reports about various members of our canine family staying for a visit. Keksi has been here, and Taika, Inko, Minna. Even some of the boys have had a flying visit (when Keskiyo's back was turned, that is). We love to have former puppies coming back now and then - it maintains a nice bond for us with the dogs and a nice bond between the puppies and their family members Neka and Maija. In general, Keskiyo is less interested in visiting family members unless they're girls who are, well, interesting. In a special kind of way. Y'know.

Coming back from Scotland last week, after dropping Taika & Minna off with Jerome, I made a little detour off the M5 to pick up Tippi. It was so wonderful having a puppy in the house again for a few days, and particularly just after seeing her brother Sisu and sister Bo in Scotland. She was a little overwhelmed by the Maija-Neka playing machine at first but soon got the hang of joining in - although she preferred to play with Maija alone.

Maija did teach her to jump onto the sofa as well. It wasn't me - honest! Now, don't tell Susan & Ian because I'm not sure if Tippi is allowed onto the furniture at home. However, she did take rather well to it and even liked to come up in the evening for cuddles. I ask you, who could possibly refuse? 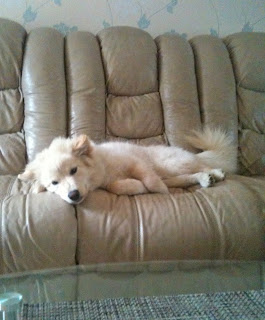 And no wonder - as you can see from this rough phone pic, she & Maija have a history of playing on the sofa together. 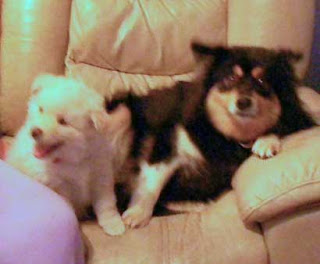 While she was here I just had to take advantage of the fact that her brother lives only 20 minutes away in Exeter and her sister less than an hour away in Cornwall. So one chilly, damp and windy afternoon I took Tippi and Ukko to visit Marja for a puppy reunion. Getting a good photo was rather tricky. Rather.

And by the time Maria wrangled them into a stranglehold for a group shot, they were utterly covered in puppy slime. 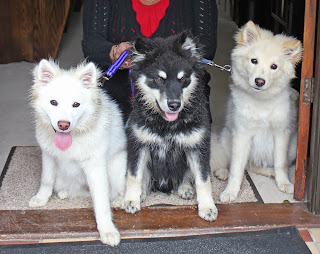 What's a little puppy slime between friends and littermates? That's just the way puppies are when they get together for a play.

And if you're wondering how they got quite so bedraggled... 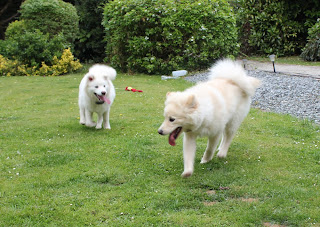 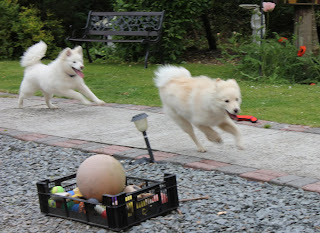 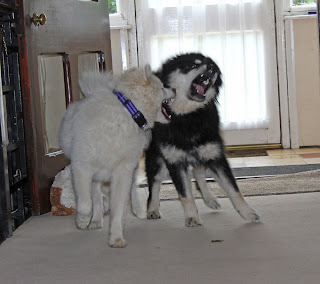 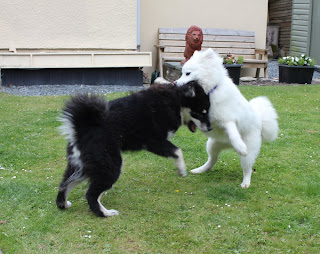 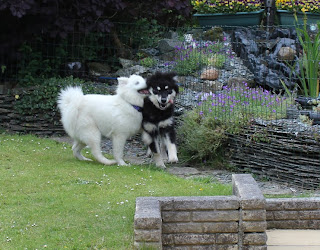 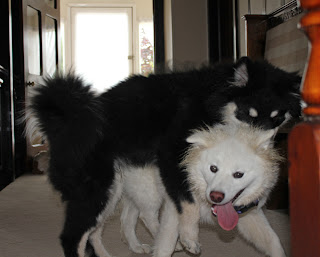 Tippi may well be in charge at home and boss her big brother Tarkka around, but she's definitely a little lady dog and prefers one-on-one games. When things got too hectic with Marja & Ukko (which was more or less the whole time), then she would simply take herself off to raid Marja's toy stash. 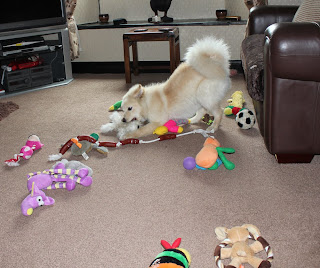 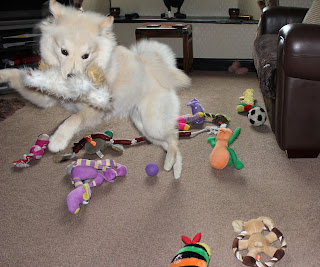 When Marja finally got tired, she disappeared under her pew for a... well, a pew. 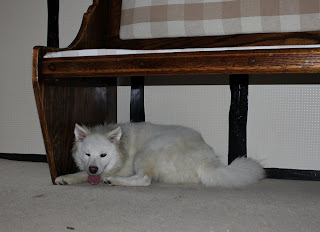 And when Ukko finally got tired? 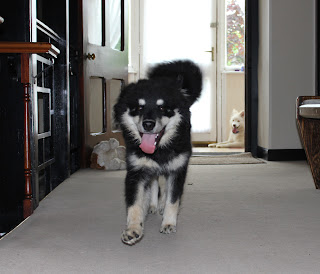 That's right - he didn't actually get tired. Or not tired enough to give up, anyway. It was all just too exciting. But he slept very well on the way back home and I'm sure Becca had a nice quiet evening with him too.

This weekend there's a quick trip up the motorway to the Southern Counties show planned. This is the show where we always have a Finnish judge and an excellent turnout. It's also the show where Taito has always won either Best Dog or Reserve Best Dog. This year Taito won't be in attendance, regrettably, as he's away on holiday. However, we'll be having fun anyway.

And when we get back, the puppies will be 6 months old and heading for their own first shows. An interesting summer ahead. Interesting? Well, funny perhaps.
at 19:47 No comments: