Here they are, a little late, but with their new names, which, as always at this stage, are still subject to Kennel Club approval. 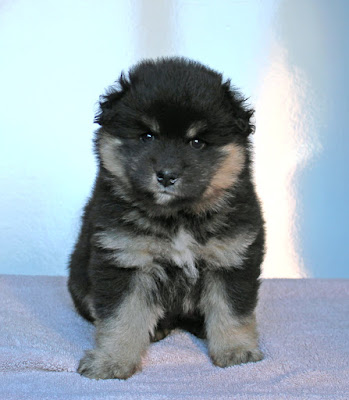 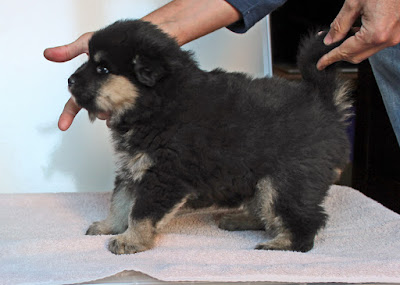 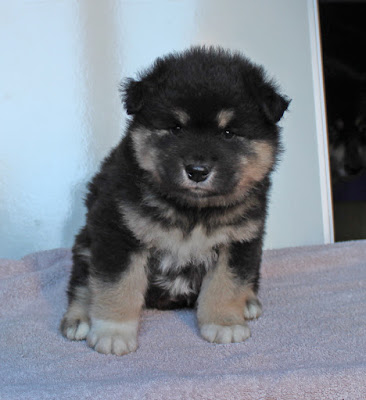 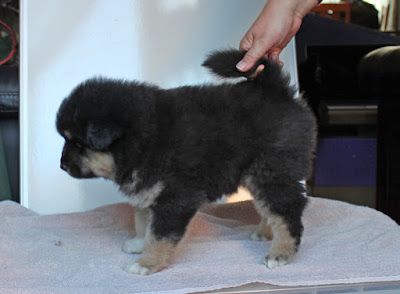 4 weeks old is one of the biggest milestones for the puppies because that's when they move downstairs, meet the big dogs and start to receive visitors.  Up until 4 weeks they thought that Jay and I were the only giant monsters in their world, so it comes as a bit of a shock to find out that the world is full of them!

Tuuli had abandoned the puppies a few days before, going upstairs only to feed them and then scurrying back down, so on Friday night, a couple of days early, the puppies moved downstairs to the big pen.  It was time, really, because they certainly needed that space to do some extra exercising and build up the muscles on those jelly back legs.  Even just 24 hours later they were getting stronger and more sturdy on their feet.  Yes, even Kuu.

Tuuli was so happy to have them move downstairs and she has enjoyed showing them off to all the strangers who have been coming to visit them all weekend.  And she just loves to lie in the pen with them playing.

We woke up to a really fabulous warm and sunny autumn day this morning, so we managed to get some photos early before the day's visits started.  And the puppies even got into the outdoor pen for a few minutes for a little Facebook live video while I cleaned the indoor pen.  Convenient, to be sure, but I'm guessing we're not going to be quite so lucky every day.  On those days the puppies get the run of the kitchen while the indoor pen gets cleaned.   And then, as often as not, the kitchen floor gets cleaned too...

And so to the 4-week portraits.  They are starting to look like little Lappies now with their tails over their backs.  Not so much when they're on their own for posing, though, granted.