Before February leaves us I must get one pupdate in. In 12 hours the puppies will be 12 weeks old and well into the housetraining, puppy classes and learning how to get all the members of the household doing their bidding.

Here are a few photos I have been sent (or nicked from blogs, Facebook, etc). First the girls: 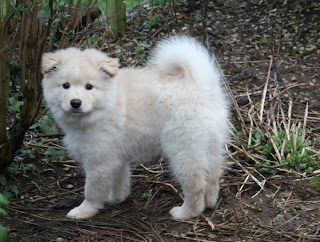 Tippi in the garden practicing her show stand while preparing to get muddy. 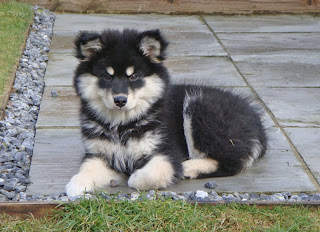 Bo with ears up already. 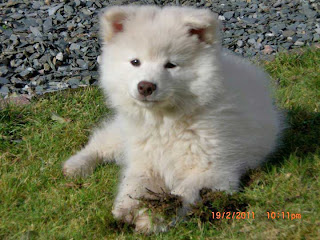 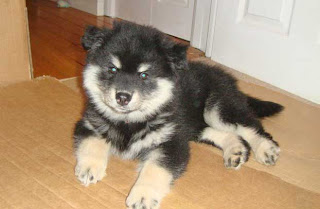 Ukko chilling out & practicing being cute. 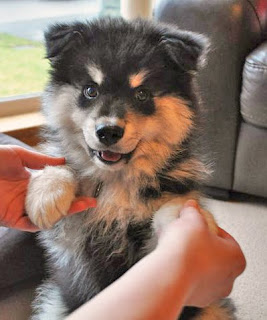 Sisu looking innocent - but I don't think we're fooled, are we? 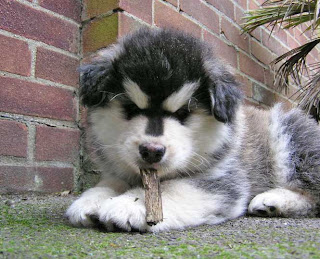 Kuura enjoying a cigar in the garden.


And if you're wondering where the photos of Buddy are, a broken camera is to blame. I'm still holding out hope for one or two.
at 13:45 No comments:

You may well wonder what I've been doing that is so important that I have little time for updating the blog. Apart from catching up on the work that I missed while the puppies were here, that is. Well, I've been clearing the decks in a rather big way. 2 cats, 3 (often 4) dogs, and 4 litters of puppies have had their toll on the living room carpet (cream, yet!) and so this was always going to be the winter of replacing the carpet with something more practical. Something less absorbent. Less inclined to attract and display mud quite so willingly.

All new flooring is quite an upheaval, involving putting all the furniture... somewhere, moving the piano and the ludicrously heavy television. So while facing that kind of turmoil I thought I might as well paint the walls too so that they will be more in keeping with the new wood floor. And while I was at it, having had quite enough of living in squalor, I decided to make a bid for something a little more minimalist.

The result is an enormous amount of stuff leaving via the front door the past 2 weeks. And up the stairs. One of the things we are banishing from the living room is the massive CD collection. Between us we have, er, a rather large number of them. So we're now in the process of transferring them into iTunes and onto the iPods and then out the door. Anyone want to buy some used CDs? Perhaps I should take them to a carboot sale or something. On one of those free weekends I don't seem to have.

Anyway, I've been busy. Needless to say, ever-helpful - not to mention nosey and willful - Neka has been "helping". 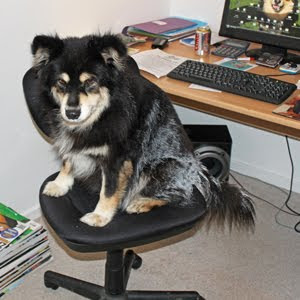 I have had just the right number of admonishments on my recent lack of attention to this, my beloved blog, to get me back to the keyboard. So, not an actual slap. More the metaphorical kind.

The puppies are just about 11 weeks old now and all well and truly settled into their new homes. That's true even of Marja (The Puppy Formerly Known as Marilyn), who didn't go to her new home until she was almost 10 weeks old and her family returned from their holiday.

This is where I would normally post a photo of her with her new family as they set off from here. But for the first time in all the puppies who have left here, I don't have a photo. I distinctly remember taking some but apparently I accidentally deleted them from the camera at some point. Don't ask me how, because I have no idea. Put it down to the puppy-parting trauma. Instead, here's Mark being taken on a tour of the new garden for the first time. 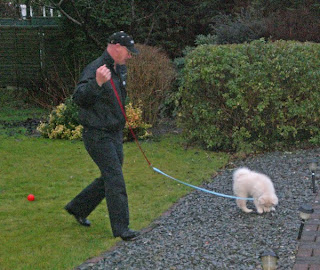 We have kept puppies for a couple of extra weeks before - in fact, this has usually been to accommodate previously planned family holidays - but it always worked out a bit easier to manage in the past. It is one thing to say goodbye to the puppies when they are one of a bunch, going off to their new homes one after the other. It's not easy, as such, but it's normal, expected, part of the natural order of things. It's another thing entirely to keep one longer than everyone else, have her slot into your routine and start going for walks with the big dogs and all that. A completely different story.

Taito from our first litter, stayed until he was 9 weeks old and then as he was leaving, his brother Torvi returned for a week, having been in his new home a fortnight already. So there was plenty of distraction to keep us from getting to attached to one or the other. Emma tells me that Rauhan stayed a bit longer than his littermates too, but I have no recollection of that - I dare say I was rather befuddled by the raising of the litter of 9. At any rate, we kept Maija from that litter, so again she provided a welcome distraction from all the goodbyes. From Taika's litter, Minna was the last to go, but she went only a couple of days after Usko, so it was just routine farewells somewhat extended. Parting with Marja was very difficult. Very. I really don't recommend it.

In the week before she left we had a play date with her brother Ukko. 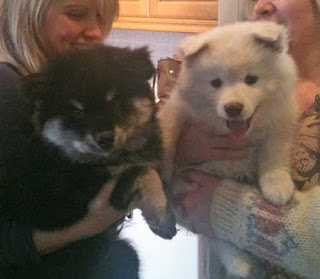 And now she's very happy being spoiled by Maria & Mark. Well, spoiled by Mark and properly trained by Maria. Here she is spreading her toys around, taking over her new house. 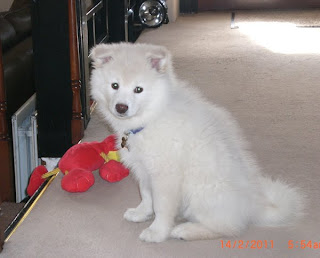 I do have plenty of updates on everyone and will get to another post with them just as soon as ... well, let's just say that I still have a lot on my plate even with the puppies away.
at 18:07 No comments:

A brief interlude from puppies & work to plead with all my readers: please click on this link and sign the petition:
http://www.38degrees.org.uk/page/s/save-our-forests#petition

One of the forests targeted for selling off to private ownership is the place we walk our dogs 4 or 5 times a week. If you know and love Haldon Forest in Devon or Cannock Chase in Staffordshire, for example, and you want them to remain open access, please sign this petition. It's going to be submitted tonight in advance of an initial vote by MPs tomorrow.

Even if these forests mean nothing to you personally, please support the cause of all forest lovers, walkers and dogs in the UK - click the link and sign the petition anyway. If you want, you can use my postcode: TQ12 6TZ