And did I mention irritating? Very, very irritating.

For a week or 10 days after Crufts Keskiyo was absolutely convinced that Neka was in season. More than just the trying-it-on-to-see-if-it-flies that he attempts from time to time, this was full-on, whiny, bug-eyed & panting certainty that she was up for it.

To be fair, there was someone in the neighbourhood in season, which Keskiyo always knows all about. But for some reason he was determined that it was Neka.

So, was it Neka? Definitely not. Neka was spayed 2 years ago. Here's an interesting thing, though: if she had not been spayed, then she definitely would have been in season after Crufts. How do I know this? Because she was always in season just after Crufts. In fact one year I think we might even have missed going altogether because she was in season during Crufts.

How did he know?

However, it's true that Maija and her littermates were the result of a tryst between Neka & Keskiyo during one of those Crufts seasons. I suppose it's possible that there is some springtime smell he might associate with having his jollies with Neka, and then with a bitch in season nearby, you can see how he might get confused.

So, strange but interesting too.

And, man, he was driving us crazy! Now he's over it. Finally.

And speaking of Maija's littermates & Crufts, we all take a couple of days to recover from that event each year. It's equally draining for dogs & humans alike. Here's Inko illustrating how we were all feeling the next day. 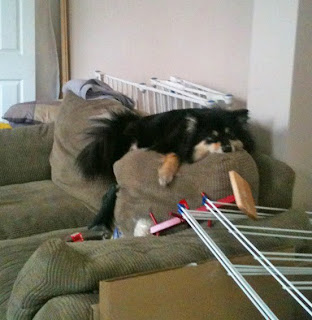 Team Infindigo*
L-R: Paula & Inko, Emma & Rauhan, Liz & Usko, Karhu & Wendy, Taito with Matilda & Emma
Missing in action: Tarkka & Jo who unfortunately had already taken off by the time we got organised into the group shot.

So it's all done and dusted for Finnish Lapphunds at Crufts 2011 and now we start working towards next year. I want to thank the human members of Team Infindigo for getting their dogs qualified to attend and then for bringing them looking so spectacular. I think this is the first year yet that everyone turned up in good coat! Usually someone or other is moulting or in season or both. This year everyone was looking in tiptop condition and I was thrilled with all of them.

Quite apart from the good looks, in a breed where some males can be very stroppy indeed with other males, and at the sort of event where the stress levels can also cause some bitches to be very snappy with other bitches, the temperment of this bunch is truly second to none. I couldn't be more proud of them.

For the first year I brought no dogs with me as Neka and Keskiyo were both bred by the Crufts judge so were ineligible. Somehow I still managed to bring as much stuff with me as if I had 3 dogs in tow, but it was great to be able to relax and enjoy the day. I'm usually so distracted by my own dogs that I don't get to see much of what's going on.

Of the 11 who qualified in 2010, 6 attended. First up was Usko and Ian, taking 2nd place in Special Puppy Dog. You would never guess from the professional looking performance in these photos, but there was the teensiest bit of tail chasing involved. Luckily Ian's blushes were spared because Usko was far from the most badly behaved puppy in attendance, as he shared the class with a pair of puppies who are affectionately renown for their metaphorical devil horns.

The puppy classes at Crufts are always entertaining for the spectators. Something about the big event, inexperience and youthful exuberance gets the better of them everytime. Not to mention a nerve or two affecting the handler.

Apologies to Ian for managing to chop his head off in every single good photo of Usko. Oops. 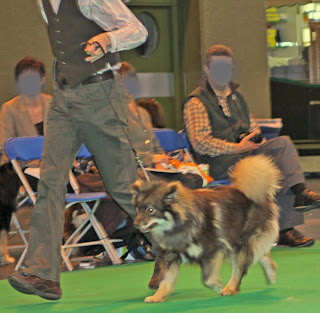 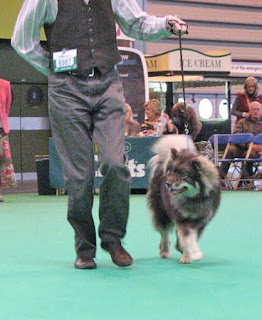 "Anything interesting going on over there?" 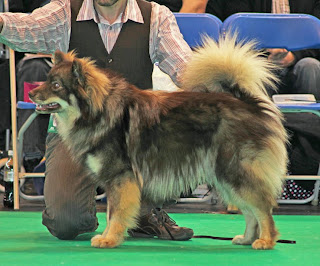 
Next came the Postgraduate Dog class featuring the brothers Tarkka and Rauhan where both boys placed in a big class; Tarkka in Reserve and Rauhan bagging 2nd. I'm so grateful to Emma for asking me to handle Rauhan for her as I love the opportunity to show "my" dogs. 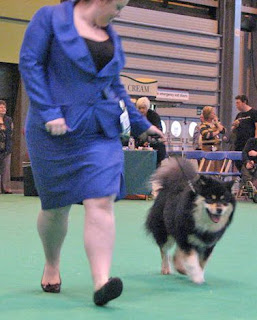 Tarkka on the move. 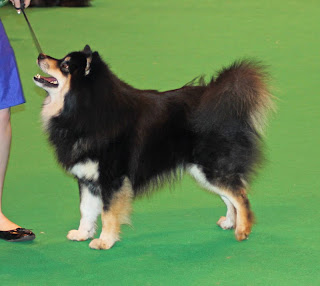 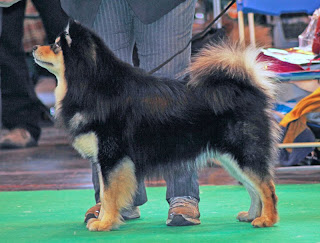 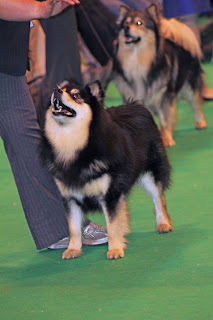 I didn't get any very good photos of him moving, but many terrific standing shots.

Then the older pair of brothers came next - Taito took 3rd in Limit Dog and Karhu VHC (5th) in Open Dog up against no less than 3 European top-winning multi-champions and the top-winning dog in the UK for 2010. 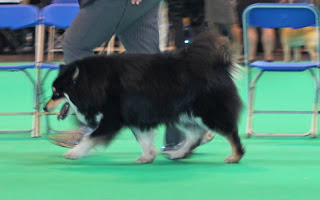 Taito a bit too intent on checking out the floor for dropped treats. 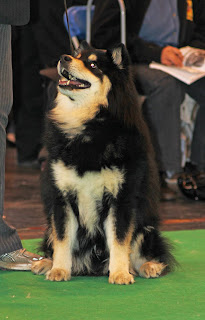 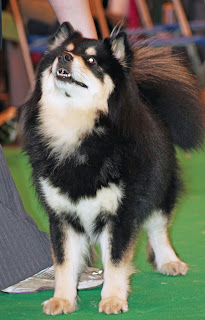 But we got there in the end. 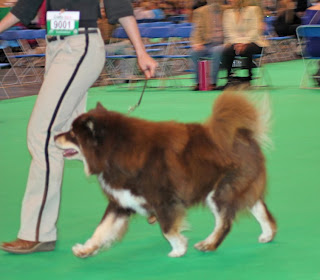 There they go. I was a bit distracted from watching Karhu by Wendy's gorgeous trousers. 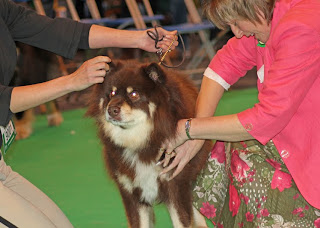 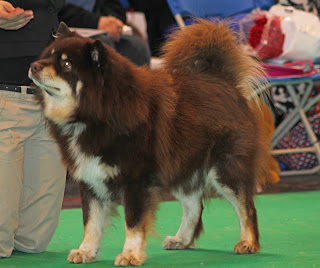 Last up was Inko who was accidentally entered into 2 large classes but managed to do well in both of them, coming Reserve (4th) in Postgraduate Bitch and VHC (5th) in Limit Bitch. 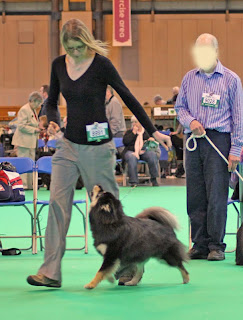 Paying a bit too much attention to Paula but with quite gorgeous movement nonetheless. 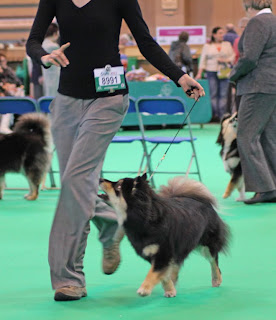 In the tradition of her mum's show style, having a little something to say. 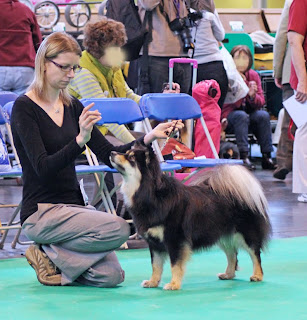 And so Usko, Rauhan & Taito have all qualified for Crufts 2012. Now that Finnish Lapphunds have Challenge Certificates on offer (i.e. can become Champions and are no longer considered a Rare Breed), qualifying for Crufts will be more difficult than ever as only a small proportion of shows are now qualifiers. As a result, it's likely that Crufts 2012 will have a pretty small entry - shame.

*Thanks are also due to the behind-the-scenes members of the team - Andrew and Scott - who tirelessly took so many of these great photos.

In only a week the Tuisku puppies will be one year old and no longer puppies at all. I've had some updates here and there - and it is perhaps needless to say that we got to see one or two of them when the last bunch were receiving visitors. 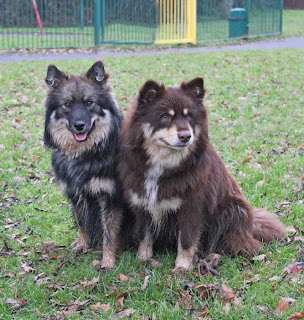 Minna and Taika just a tad muddy after a walk during their visit. 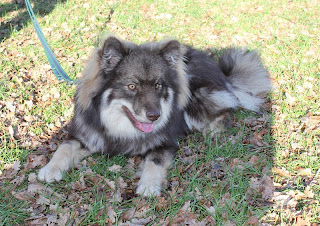 Usko also came to visit and we had a bit of a challenge to get him calm enough for a photo as he was rather excited to be here seeing us & his granny Neka. 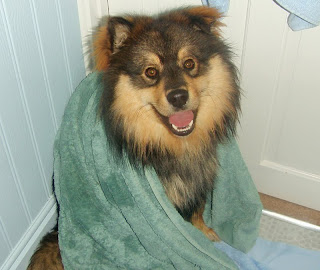 Kallio had his first ever bath.

Lana went skiing in Scotland with sis Ellie & the rest of the family. 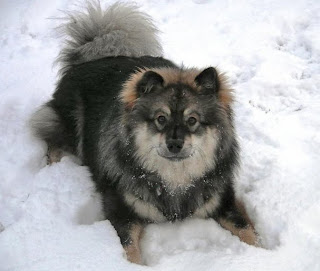 While Kesa enjoyed the snow down south.
at 08:52 No comments: