This blog is not exactly the right place for this, but I cannot let the event pass unmarked. I found out last night that on Friday night, one of my dearest and oldest friends suffered an unspeakable tragedy. Her 20-year-old nephew, smiling joker and adored light of her life, died in a horrific accident when the car he was travelling in with 3 friends was swept away by a sudden flood. It is simply too sad.
at 12:45 1 comment:

Email ThisBlogThis!Share to TwitterShare to FacebookShare to Pinterest
Labels: OT

I'm delighted that the other Emma & her hubby Andrew have moved down to the westcountry where we get to see them more often and where I can get my sticky fingers on Taito. Emma hasn't been able to get to very many shows as yet, but with them now living more or less between me and all the champ shows of the year, I foresee Taito appearing in the ring a great deal more often than he has done in the past.

After I had piloted Rauhan around the ring a few times, I was warmed up (and then some) and it was Taito's turn. Yet another wonderful boy, having inherited the best of both his parents - Neka's flashy markings and outstanding temperment and his father, Elbereth Kimmi's gorgeous physique. Here he is being shown not-so-expertly by yours truly. 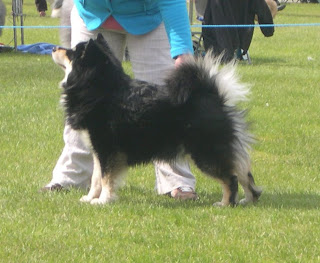 I was quite impressed at Crufts with Emma M's expert showing of Taito and I couldn't understand why he wouldn't stand perfectly on demand for me. Little did I know that Emma has her own intricate, not to say idiosyncratic, method of training which at no point involves the use of the word 'stand'. How was I to know the poor dog had no idea what I was on about?

At any rate, he's a very clever thing (with a conveniently motivational appetite for sausages) and by the end of it, he was getting the hang of this 'stand' business. He won his class as well, in spite of a few, er, complications. The judge looked at him and said "Why don't you move as good as you look?"

An excellent question, I thought! Because the last time I had been on the outside of the ring watching Taito move, he had the free and open gait of his mother who, in my view, has some of the best moves in the business. Normally they move like they're on wheels. So I ran with him fast, I trotted with him slowly, but no matter what I did, he was still like a sack of potatoes. What was Emma's secret? I wondered.

After the judging was done and dusted and we were taking the dogs for a walk around the showground, I got my answer. Away from all the crowds, Taito heaved a great sigh of relief and had an enormous poo. Ah, so that's why I couldn't get him to move well. Who could blame him? After that, he was back to his old self, gliding along as if on air.

I have well and truly learned my lesson. When you go to a dog show, look out for the increasingly desperate people hopefully walking their dogs in circles as the clock ticks down the minutes to the time they are due in the ring. But don't laugh.

Here is Taito concentrating hard on the sausage in my hand as we pack him and Neka into the car after the show. Neka has learned that a big grin will take her far in life. 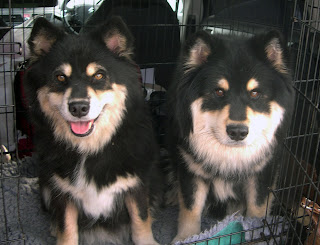 And so I have added Rauhan & Taito to my list of Crufts-qualified dogs this year. It's looking like we're on a bit of a roll, and now I'm looking forward to the next show in a fortnight where I get to meet up with Keksi and Tarkka, and their families, all of whom I haven't seen for ages.
at 17:00 No comments:

It wouldn't be WELKS without coming home with a bit of sunburn, and this year didn't disappoint. In the warm sunshine, the Lappy contingent bagged the best spot to set up on the grass outside the tents and had a great day socialising and showing.

As mentioned earlier, it was Rauhan's debut and Emma H's first ever dog show, so I was reluctantly called upon to show him myself. Did I say "reluctantly"? HA! As if! I couldn't wait to get my hands on him, and I would be more than happy to pilot the handsome little star anytime. For that matter, the same goes for any of the Infindigo bunch. I'm so proud of them all.

As I was booked to show dogs in lots of different classes, Jay was a bit busy lining them up for me and sadly missed getting any photos of the puppies actually in the ring. I'm hoping that Emma had better luck.

Like his sister before him, at his very first show, Rauhan won the puppy class with Inko coming 2nd, and then he went in and won Best Puppy in Breed in the challenge against an older puppy from a different class. I was thrilled with how well he did, showing like a little pro - Emma has done quite a job in her 3 ringcraft classes! The judge loved him, commenting on his beautiful expression, which is so like his dad's I think, and went on to say that he would like to steal him away and take him home. Well, who wouldn't? 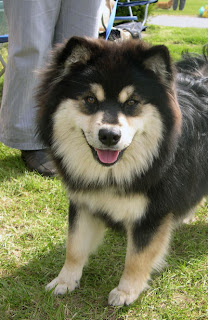 I think it's quite charming how much like his brother, Tarkka, Rauhan looks. To my eye, they both look like an absolute combination of their parents. But where Tarkka looks more like Neka, Rauhan looks more like Keskiyo. And with a little nod towards his stunning grandpa, Neka's sire, Pascha (Elbereth Runo in Bernavia).

And can you see the family resemblance with sister Inko? Here they are in a rare still moment after coming out of the ring. 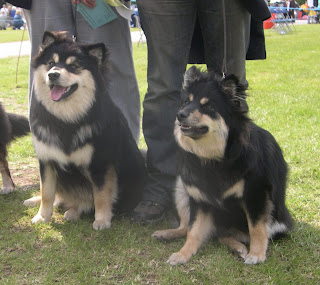 Inko chills in a chair while watching all the rest of the judging with interest. What do you suppose is going through her head? 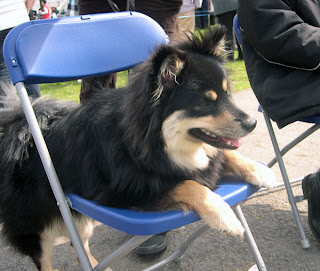 Nice to see the babies following in their mother's pawprints. She qualified for Crufts at her first attempt every year. And then today, at their very first champ show, Working & Pastoral Breeds of Wales, both Tarkka and his sister Inko qualified for Crufts. This is accomplished by placing either 1st, 2nd or 3rd in a class at a championship show. They were both entered in the Junior Dog or Bitch class for FLs up to 18 months old. Inko came 1st and Tarkka came 2nd. WOW!

And then, to top it off, Inko was crowned Best Puppy in Breed and went on to compete in the Puppy Group against all the other puppies from all the other breeds. As if that wasn't enough, Tarkka, at the ripe old age of 8.5 months, was named Reserve Best Dog.

Was I there to cheer them on and enjoy their success? Well, actually, no. Did I remember to enter that show, knowing full well it would be the puppies' debut? Again, that would be no.

But Paula did send me this phone pic of Inko nabbing Adam's chair as she was waiting for her turn in the ring. Hopefully Jo will also return armed with a photographic record of the day. 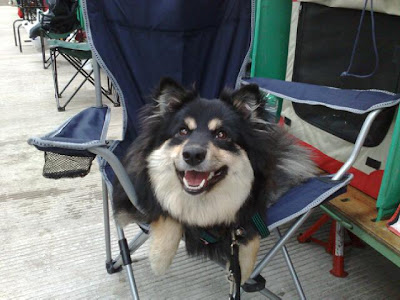 And here's an adorable photo of Tarkka I found on my phone the other day. Too bad the light is so poor, because the puppy is just too cute, looking very pleased with himself perched on the arm of the sofa circa 6 weeks of age. 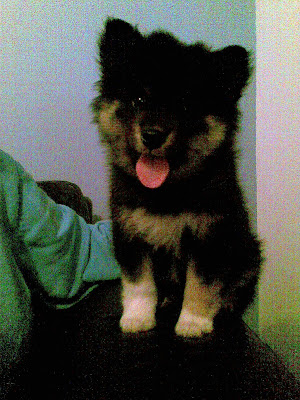 How like his dad he looks! Shown here at 8 or 9 weeks. 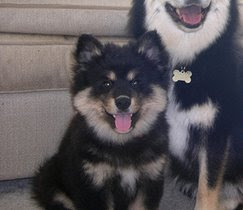 And so, in honour of this historic day, I have started a new list in my sidebar showing the Infindigo dogs who have qualified for Crufts so far (and including, of course, my own Neka & Keskiyo who are Infindigo in name but Elbereth by birth).
at 18:48 No comments:

So I dragged myself out of bed this morning bright and early, against my better judgement. Not quite enough sleep. Drunken teenagers having fun in the park next door at 2:30am. Full moon shining through the window. But I managed to get up and out anyway because I had made plans to go visiting.

The long weekend snuck up on me. Suddenly it was Thursday and there we were staring 4 whole days off in the face and no plans. Hurrah! So I made some plans and by 10am we were heading up the M5 in the warm sunshine with the rest of the demented holiday traffic.

We went to Kate's house to visit Taika and her neighbour, Maija's sister - formerly known as Sulo - Kaija. (Don't even go there - you can imagine the calls echoing through the woods when we all went walking together and the girls would run off: 'My-ah, Ky-ah, Tyke-ah, Neek-ah!')

But what a great day we had. After a mad game in Kate's puppy-fied back garden, we all went to a local pub and had lunch on picnic tables in the sun. From there to the aforementioned woods for a long walk.

Photos were pretty tricky to get, as one might imagine. But I got a few.

So, who does Kaija resemble most? Not Neka, not Keskiyo, but her sister Maija. But for their different coloured front legs, they were almost indistinguishable. 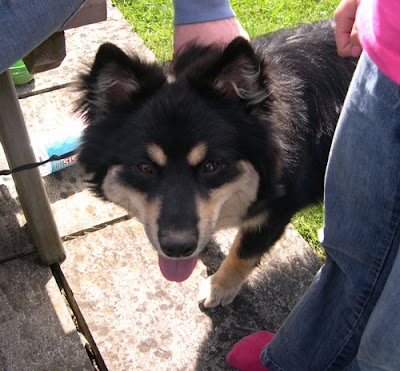 How funny! Although similar, they didn't look quite so much alike as small puppies. Having said that, when the girls were all running ahead together, no one could tell which was which between Neka and her 2 babies. Taika, of course, was a bit easier.

Taika and Kaija, being neighbours, are great buddies. 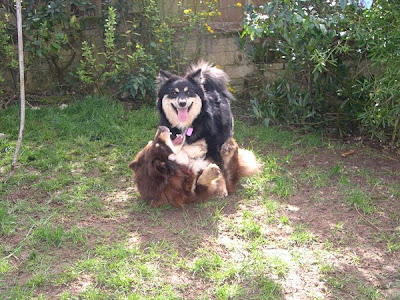 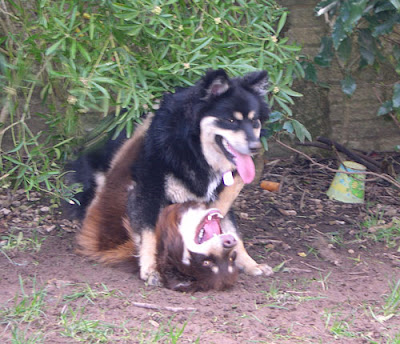 Neka was too busy nosing around the perimeter of the garden - and through the house - to pay much attention to the sisters playing together, but Maija joined right in... 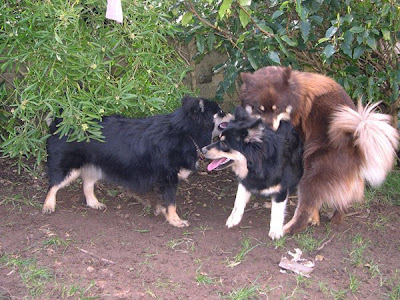 ... and proceeded to steal and guard all the bones. 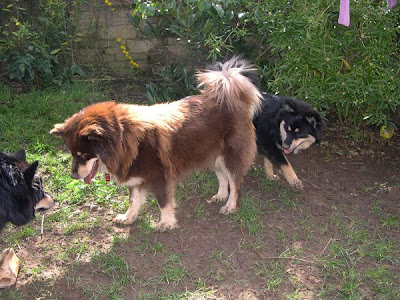 What fun we all had, and it was a very muddy and tired, happy bunch of dogs who slept all the way back to Devon. Best news, Jane has agreed to enter Kaija in the Bath dog show so I get to see a bunch of the puppies all together. It should be a fun day, and I'm really looking forward to it already. Joe now has the task of teaching Kaija to stand still and well. And, of course, she will have to trot nicely on her lead too. 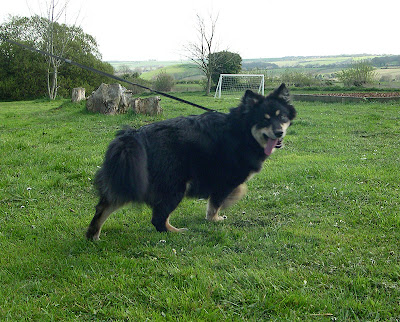 Looks like there's still a way to go on that one.