happy birthday to the veterans

Well, well, well.  A few months ago I had the shock of realising that my puppy dog Neka had somehow reached the age of 10 years while I had my back turned.  Even greater than that, though, is to find that today her (and my) first litter of puppies turn 7 years old and become officially veterans.

It really doesn't feel like 7 years since I first read The Book of Bitch cover to cover (3 times) in preparation for what was to come.  Nor does it seem like 7 years since I sat up 3 nights in a row with an increasingly-restless Neka as we both steeled ourselves for the big new adventure.  And it doesn't seem like 7 years since Neka shredded the sofa cushion, leaving the foam in chunks all over the floor, so that she had a nice comfy nest to give birth in.  (Don't worry - I did move her upstairs to her brand new and shiny whelping box.  I was just a bit tardy in doing so, apparently.)  These days I am much more in tune to the grunting of a bitch whose contractions have started.

So a very happy birthday to my gorgeous firstborns and the very first Infindigo veterans, in birth order, as always, at 7 weeks and 7 years (or as close to 7 years as I have).  I was a bit slow to request new pics of the new veterans, so if I get some more up-to-date photos, I'll update the blog post too.

Last week Emmi was scanned to see (a) whether she was pregnant; and (b) how many puppies she was likely to have.  I was quite convinced she was in whelp, and I wasn't the only one - after all, she was showing all the signs, including getting round in the belly.  But somehow she fooled us all and I got the dreadful news that the much anticipated and enormously expensive AI mating didn't work.

I was so shocked that I actually took Emmi to a second place for another ultrasound because I needed a second opinion.  Sadly, the second opinion was the same as the first:  no puppies.

One of the great joys of breeding puppies is making families so happy when they get their new puppy.  One of the saddest jobs I've ever had is telling waiting families that the puppy they thought would be born in a few weeks doesn't even exist.

I've been lucky, really, because this happened to me only once before, and that time we had not even accomplished a mating, so I didn't have the same few weeks of expecting puppies before getting the bad news.  Bitches failing to get pregnant is far from a rare event, so I don't really have a lot to complain about, having been successful every other time.  It doesn't make it any easier to pass on the sad news, though.

So when Emmi's next season rolls around we will be trying again.  Not the AI route this time, which means a different sire.  Who he will be is yet to be determined, but I have a few ideas up my sleeve.

After the heartbreaking job of reporting the mating failure, I distracted myself from my disappointment with a trip to the Southern Counties Championship show where we had a lot of dogs entered under Finnish judge Pekka Teini.  The last time we went under this judge, 5 years ago, Taito was Reserve Best Dog behind his father who was Best of Breed and Rauhan was Best Puppy.   We didn't fare quite so well this time around, but I had a terrific day anyway and managed to win Best Breeder, being the only one to enter a team.  The judge did say to me they were a very nice group and he very much liked their Finnish names.  You can see all the results from the day here.

It was the very first show for Tito and I am so grateful to his family for letting me steal him away from their holiday in Cornwall to take him.  He didn't place this time around, but he did behave extremely well for his first time.  I had intended to get lots of wonderful photos, having several Infindigo dogs in attendance.  For one thing, as well as Taito being there, so was his dad Kimmi and his own kids Tito and Talvi.  Unfortunately my big plans just didn't happen and I only got a couple of quick phone shots of each of the puppies with Taito.  I didn't even manage to make these half-decent photos because I had somehow inadvertently switched on a strange filter so the quality is very poor.  But, better than no record of the day at all.  Er, maybe.

Does anyone actually use those terrible filters on iPhones cameras by choice or only ever by accident?

After the show a large group of us met at a nearby pub and sat in the garden in the sun to have a wonderful lunch.  Shout out to The Swan Inn in Newtown, Newbury, for their helpfulness and hospitality with our large group of people & dogs as well as for really terrific food.  Socialising with friends is what dog shows are all about for me, really.  It was a good day.

Back at home again, my own dogs are enjoying their days in the long grass of the field where we frequently walk. 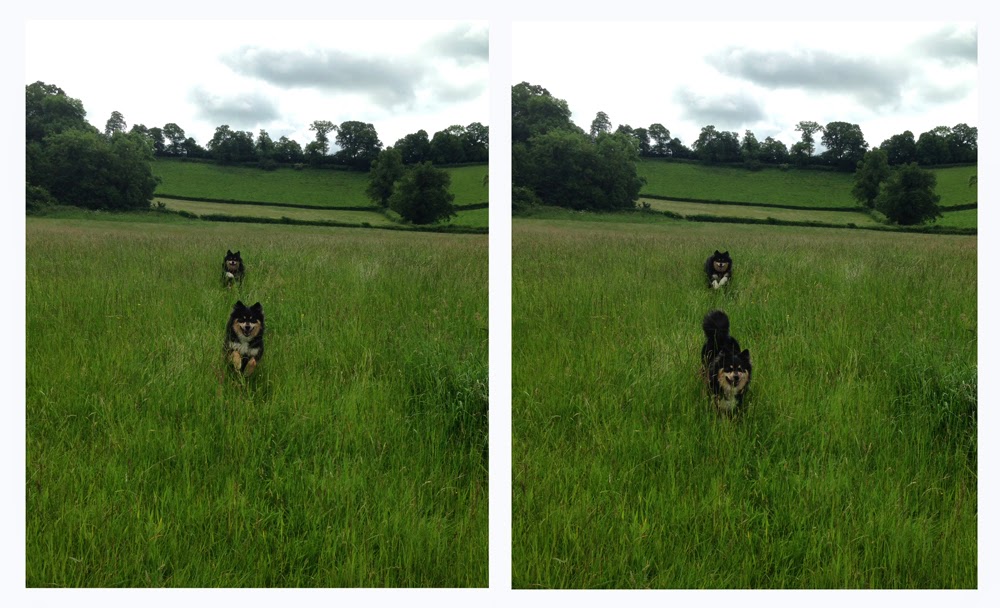 I love this time of year in the field.  The pros of letting them run in the long grass:  (1) They love it, (2) It's really excellent exercise, (3) They are much less likely to disappear because they can't see anything that might take their fancy, including pheasants, other dogs or people.  The cons:  just one - ticks.  Later in the year we'll have to worry about grass seeds embedding in skin or ears too, but for now the only real problem with grass fun is they almost invariably pick up ticks.  Horrid things (the ticks, not the dogs).