And so to the dog show. 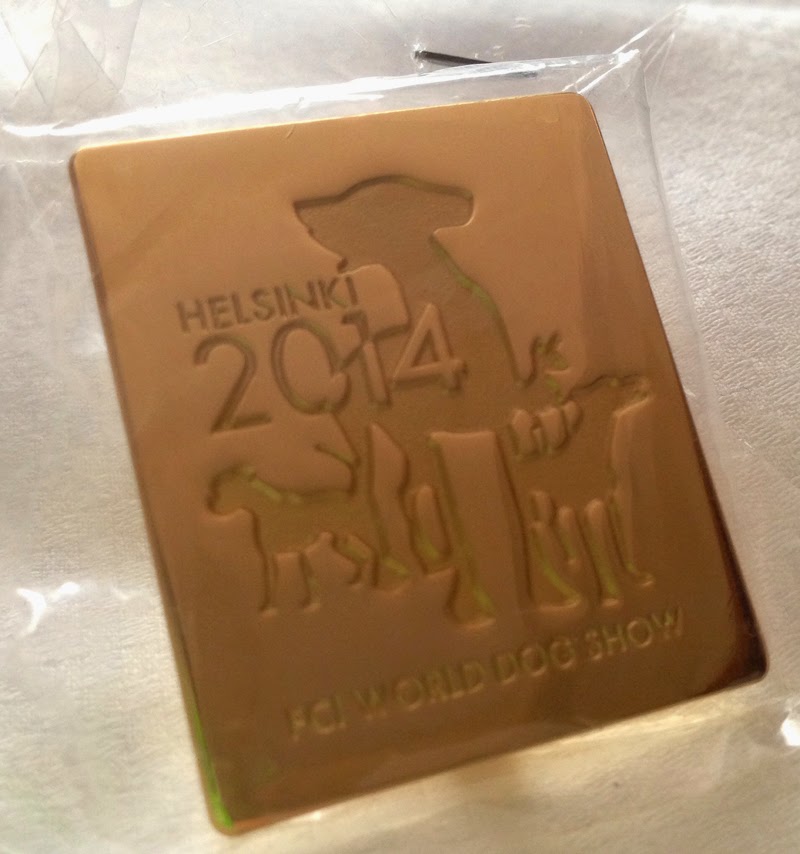 Last weekend the World Dog Show 2014 was held at the Exhibition and Conference Centre in Helsinki.  In their planning, the Finnish team decided to offer free entry to the national breeds, and so they had record numbers of dogs entered for Finnish Spitz, Finnish Hounds, Lapponian Herders, Karelian Bear Dogs and, of course, Finnish Lapphunds, who had the biggest entry of all at 526 dogs entered.   I must say it was a bit of a treat to see a Karelian Bear Dog (several, in fact!), as it is a breed I've only ever seen in photos before.  They have fabulous two-tone tails.

When I heard about the show offering free entry for Lappies, I thought it too good an opportunity to miss, as with free entry there was sure to be an enormous number of dogs to see.  So a bunch of like-minded Lappy nuts from Britain decided to visit Helsinki for the show.


If you read my Helsinki sightseeing blog post, then you will know that I had to scrounge photos of the show from other people.   I did, in fact, get a few early pics, but I only know who some of these dogs are as I haven't yet had the opportunity to sit down with the programme to puzzle it all out. 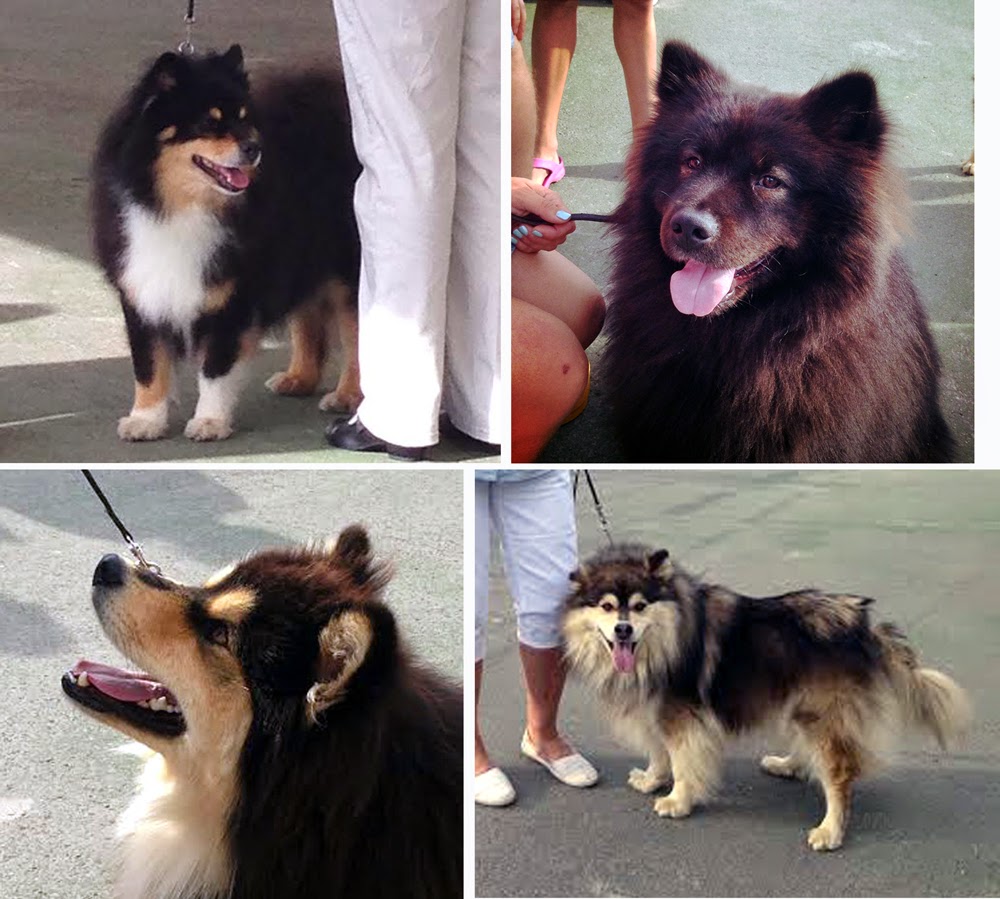 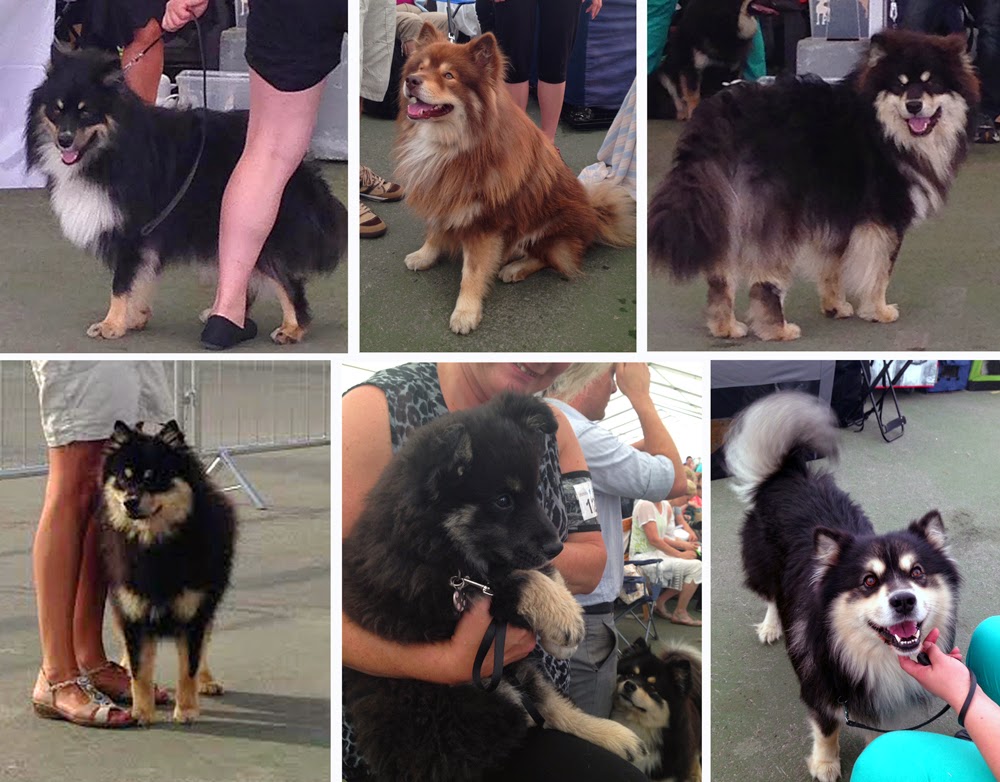 Pretty little bitch
Even a tiny pup was there
Smiley boy


It was a lovely surprise for Jane and I to get to meet Jaana's dad, Dagolas Ferrari.  And as I was otherwise engaged when I spotted him, I have to thank Liz for grabbing some photos of him.


So, what on earth could I have been doing that would interfere with getting photos from this once-in-a-lifetime event?  Well you may ask!

When the show entry deadline came and went, Jaana's breeder, Sarah from Lapinlumon, posted on Facebook that she had entered a large number of dogs and was looking for extra handlers.  I have always wanted the opportunity to show at a big FCI event like the World Dog Show, and so Jane & I wasted no time in volunteering for the job.   We packed our show suits and hit the Exhibition Centre bright and early ready for a crash course in European showing.   So while 5 rings were full of Lappies all day, I didn't get to see much of the actual showing.


The show style was very different to what we're used to in the UK.  For one thing, the dogs line up in the ring in numerical order.  I don't know how the numbers are allocated - they don't seem to be alphabetical as they are here.  I was very impressed and grateful at how well all the judges and stewards spoke English.  As always when I travel abroad, I was humbled by their skills and embarrassed by my single language.  They were all so patient with a neophyte like me.

As the classes were so enormous, each judge would call in the first 20 dogs, judge that group and then move on to the next 20 until all the dogs of the class were seen.  Each dog is given a verbal critique (and a written critique later) and then awarded a grade, shown to the spectators as a coloured card held aloft - red, blue, yellow and green for Excellent, Very Good, Good and Satisfactory.  I must admit that I'm not sure about the last 2 grades and I also can't remember which colour goes with them.  Very few dogs seemed to be sent out of the ring with no grade, although I think there were some.  Perhaps these were considered "unsatisfactory" for some reason.

After all the dogs are seen and judged, then all those awarded an Excellent grade pile back into the ring to be judged again.  In the UK a judge will look at a class of dogs then either pick out their 1-4 or 1-5 choices, perhaps immediately in order or perhaps in a short-list.  Then all the other dogs leave the ring.  I much prefer the European style.  The judge looked at all the dogs again, then shook the hand of each handler in turn of dogs who were at that point excused from the ring.  Then she considered those that were left, got everyone to move their dogs again and excused a few more.  This process is continued until there are only the last 4 left for placing.  It's a style that builds a lot of suspense for the spectator and the handler alike.  It's so much fun!

In the end, I was absolutely thrilled to place 3rd with Lapinlumon Gloria.  Quite a feat, I thought, as she wasn't keen on standing.  Or keeping her tail up.  Or, for that matter, moving.  Mainly she was a cuddle-dog rather than a show-dog, but she did me proud.  And Jane and I got to keep the lovely commemorative ring clips awarded to each dog who was graded Excellent, which you can see at the top of this post.

At the end of all the showing, Jane and I then went into the Breeder Team competition with the Lapinlumon group.  It was quite impressive to see so very many teams of Lapphunds in one ring.  There were no fewer than 46 teams entered, although presumably not absolutely all of them turned up.  But take my word for it when I tell you there were a lot of them.  Truly a once-in-a-lifetime experience for a Lappy lover.  It was so exciting to place second amongst such venerable company.


One of the very great things about going to a show like this is the opportunity to see so many of the dogs that you only ever knew from photos before.  Another dog I was thrilled to get to meet was a long favorite of mine, Dagolas Qultapoju (Max), who is owned by Christian Lauluten at Kennel Vintervidda in Norway.  If you think I love him because he bears more than a passing resemblance to my Infindigo Taito, then you would be right!  And having met him, I can confirm that he has the same adorable chilled temperament too.  It's no coincidence that they are so alike - their pedigrees share many of the same dogs.

Another dog I have admired from afar for a long time is one of Max's sons, Ukkonen av Vintervidda (Ukko).  So when Christian was looking for handler to take Ukko into the challenge of the Open Dog class, I said "I'll get my jacket"!  There were apparently 91 really outstanding dogs in the Open Dog class and this number had been whittled down to, perhaps, a third of that for the challenge where all the dogs graded Excellent returned to the ring.

As with my previous experience with Gloria, each dog was examined by the judge again and then she moved to shake the hand of a few to excuse them from the ring.  Then she had another look at the dogs and excused a few more.  Then she got everyone to move again and excused yet more.  The audience was enormous and the atmosphere tense.  My own excitement was mounting with each cut that Ukko and I survived.  Although I was concentrating hard on Ukko and remembering the scrap of Norwegian to speak to him in, I was very aware of being one of only 4 or 5 left in the ring.  The judge moved me into second position and then got us all to run around the ring again, calling out her 1 - 2 - 3 - 4! as we ran.  It was unspeakably thrilling for me, so you can imagine how the other two people from England in that lineup felt with their own dogs.  That's right - I was 2nd after Toni Jackson with Elbereth Matkamies and before Elaine Short with Glenchess Ilolas, sire of my Riemu litter.  In 4th place was Sarah with Lapinlumon Elämänilo, Ilolas's dad.

I found it incalculably entertaining to have the 1st, 2nd and 3rd places in the strongly contested Open Dog class taken by British handlers; I was only sorry that Ukko did not belong to me!   The whole experience certainly made for an unforgettable day.

And now I know how to say "stand" in several European languages.  Well, it's a start.

a weekend in Finland

It wasn't my first trip to Finland, but it was the best.  For one thing the weather was spectacularly warm and mainly sunny.  I stayed in Helsinki this time and got to see some of the sights.  And then there was the dog show.

But first, the sightseeing.

A bunch of us stayed at the Best Western Hotel Haaga.  Great staff, comfy beds, nice pool & sauna and good food - I would definitely stay there again.  It was 10 minutes by taxi to the dog show and about 20 minutes by bus to the city centre.

We didn't want to waste a minute of our brief time in Finland, so as soon as we arrived at the hotel (sometime after 6 pm), we quickly changed into our swimming gear and hopped a bus then a tram to the harbour to catch a boat to Pihlajasaari, an outdoor recreation area located on an island about 10 minutes from the city centre.  I'm sure on a hot, sunny day this would be a wonderful location to hang out, swim, sunbathe and explore the island.  When we finally arrived there after getting caught in an enormous thunder shower, it was less than hot, less than sunny and closer to bedtime than sunbathing time.  We didn't let that deter us, however, and we had a snack in the restaurant (hello yummy chips and unfamiliar delicious spicy-mayo-like Finnish condiment) then a brief visit to the beach where some of our intrepid group even had a swim in the chilly Baltic Sea.


After that it was straight to one of the city's many wonderful outdoor cafe's for drinks and more snacks.  We happened more or less by accident upon the Karl Fazer cafe.  Let's just say it wasn't our last visit there.

The next day a splinter group of 3 of us set off on a cruise through the archipelago to a 14th-century town on the Gulf of Finland 50km east of Helsinki called Porvoo, the second-oldest town in Finland.  There was just time for lunch and a wander around the shops and pretty cobbled streets before taking the boat back to Helsinki.  Oh, and then there was the ice creams as big as our heads, of course.  Not to mention the single licorice flavoured chocolate from the handmade chocolate factory.

It was a great weekend, but it was the dog show that made it a once-in-a-lifetime experience.  But that's a separate blog post, and one that will require a little more scrounging photos from other people.