I never yet met a dog who didn't like going to the beach. For our bunch, it's their favorite place to be, and that's something I have in common with them. It's natural for me, perhaps, as I grew up on an island. Granted, where I grew up it was more breakers crashing onto rocks than waves gently lapping golden sand. However, for me there's something about the quality of air at the coast that just can't be bettered by any mountain, plain, desert or wooded valley. When I'm on the beach, I can think more clearly and I can just breathe better.

A month ago we visited this beach in Fuerteventura. Here it is at dawn. Sigh! I loved the golden light, the pale sky in shades of lavender & blue and the 25º C temperature at 7 am. 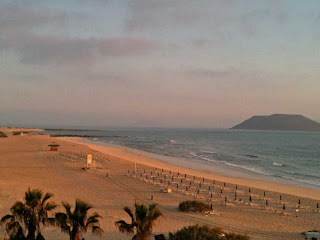 A couple of days before that, and at 12 or 14º cooler much more to the dogs' taste, we went to this place - the dog end of Exmouth beach, right here at home in Devon. What you can't tell from the photo is just how windy and chill the weather was, nor how ferocious the surf. But a quite fabulous beach in any weather. The looming red cliffs at this end are spectacular and it makes the whole experience very relaxing as there is no danger whatsoever of the dogs running up onto the road. 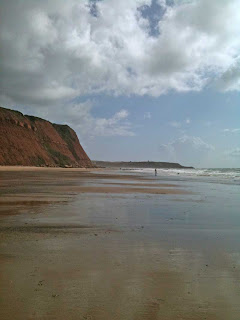 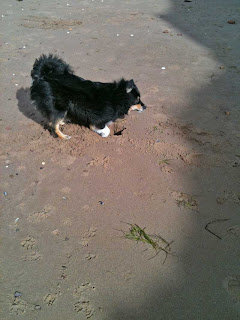 Maija having a dig in the sand.

Yesterday we went back again on a very different sort of day, weather-wise. It was unseasonably warm but grey with low mist hanging over the cliffs. Unfortunately none of the photos I took with my phone really worked, but I did get a couple of videos of the dogs having fun.

Maija is always speedy, but Neka gains a few kph and loses a few years at every visit to the beach. There's little I love more than seeing them run flat out across the sand.

Meanwhile, Keskiyo likes to paddle in the waves (dragging me with him) and to hunt down treasures like driftwood, shells and - the greatest prize of all - great flaps of seaweed.

Edit: I had a video of Keskiyo playing with said flap of seaweed, but I could not seem to kill the sound on it and I was way too noisy! In fact, I had no idea my phone recorded audio on the videos. Note to self - shut up when filming.

So what could be better than the beach? I think the only thing that generates as much excitement and joy - in fact, more - is snow. Snow is truly the pinnacle of wonderfulness. For the dogs, that is.

All the long-range forecasts say that they will be in luck this year. SIGH.
at 11:12 2 comments:

The winning photos to feature in next year's SFLS Lappy calendar have been announced and you can see all the photos as well as order your copy here. The front cover of the calendar will feature none other than our sweet Marja, as her photo, taken by me when she was barely 4 weeks old, won the most votes overall.

We were thrilled to win the coveted cover spot! Especially as the calendar gets so many wonderful photos from all over the world entered for the public to vote on. So all the hard work trying to get that photo was worth it in the end.

Last xmas we put up a tree and I kept it there long past it's best-before date until well into the new year. In fact, it only left the premises just in the nick of time to make the last local tree recycling day. While it's true that I love having a fragrant evergreen in the house, my motives for waiting so long were a little more specific. I was determined to get some cute xmas puppy photos. I took hundreds. No really, hundreds. And of the hundreds, approximately two were calendar worthy. Who am I kidding - there was no 'approximately' about it - the calendar worthy numbered actually two. Both photos were of Marja (who was Marilyn in those days) contemplating the tree at close proximity. Here are the 2, with the calendar version top: 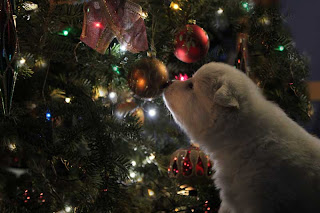 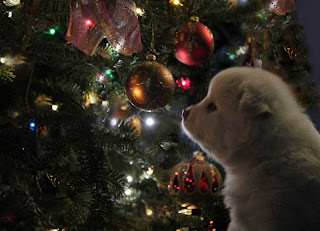 You might think that Marja was the only puppy I even attempted to photograph with or near the tree. But no, everyone had a go. One or two puppies could not be trusted to stay securely on the stool without trying to leap off, so there are very few photos of, for instance, Buddy. Or Sisu.

However, here are a few outtakes for your amusement.

There were set problems with poorly chosen background colours. 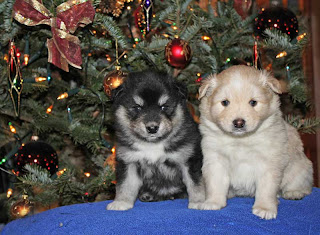 Sisu & Tippi (both still for once!)


Problems with lighting all round - what's atmospheric about a decorated and twinkly-lighted tree in broad daylight? Yet, the vast majority of photos are as well-lit as an operating theatre. Oops. 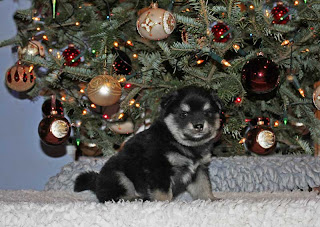 
Then there was the issue of getting the puppies to pose. Or just behave. Or even keep still for 2 seconds. 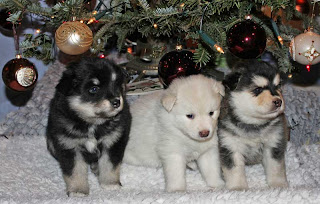 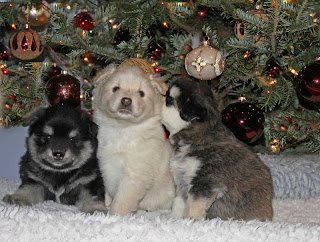 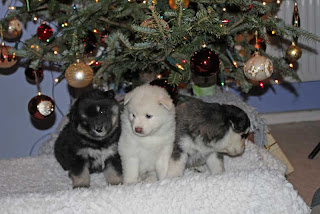 
You can see I was going for a multi-coloured selection for most shots.