Today's show was the St Austell and District CS Open which takes places twice a year in a cowshed at the Royal Cornwall Showground in Wadebridge. Again, it was a Not Separately Classified class - but on this occasion it was one that was chock-a-block full of Finnish Lapphunds. Here they all are.

In this class Neka (3rd in the row above) came 2nd and Tarkka (at the end of the line) came 3rd. A lovely result for Jo who was much more relaxed today and much better able to enjoy it. As for Neka, it was her first foray into the showring in more than a year! But she showed like the old pro she is and let everyone know she was back in business as she glided around barking all the way. As usual. Jay is always too embarrassed to take Neka into the ring, so many thanks to Kay for piloting her in spite of her 'conversational' showing style.

And little Maija had her first taste (and, frankly, destined to be one of very few) of being a showdog. Photo taken on a phone, so even worse quality than usual. 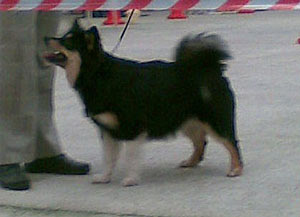 She went into AV Minor Puppy which is for any breed of puppy from 6 to 9 months old. She came 4th, which was quite a feat considering she was a very well trained little tyke who flatly refused to let the judge look at her or touch her. Ah, that's my girl. Brings me back to my early days of showing Neka.

Lo and behold, Inko has gone and done it again. No sooner did she place in the Puppy Group yesterday than Paula & Adam got the news that she also won 2nd place in a photo competition. Now we all know that Lapphunds are very photogenic creatures, but Inko is actually the 2nd one I know of who did well in one of those Pets at Home competitions, the 1st being the daddy of Neka's first litter, Elbereth Kimmi. The judges obviously have exceedingly good taste.
at 20:28 2 comments:

some shows do go on

It must be spring. My garden pond is full of frogs. No, really, I mean full. And it's the lush proliferation of wildlife in my pond that provides my quite valid excuse for not dredging the weed-choked pothole, clearing it up and cleaning it out. I don't want to ruin the gloriously fertile environment it obviously provides for all those frogs and toads and newts. Yes, newts. And they're an endangered species, you know. With their habitat declining all over Europe, I see it as my duty to leave my sluggish, dank little pond - and its newt population - alone.

And with spring comes all the crocuses & snowdrops and no more snow, of course. So today's Devon dog show, the Ilfracombe & District CS Open went steaming ahead as planned. Although I forgot to enter any of my dogs, Tarkka was there at 6.5 months in the ring for the very first time. I don't think he's ever even been to ringcraft. And if you know Jo, you'd have been amazed at how nervous she was. But she did a great job as you can see from this rather blurry action shot. 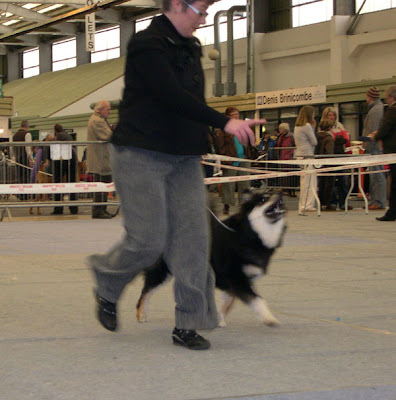 Tarkka on his grooming table before his big debut. 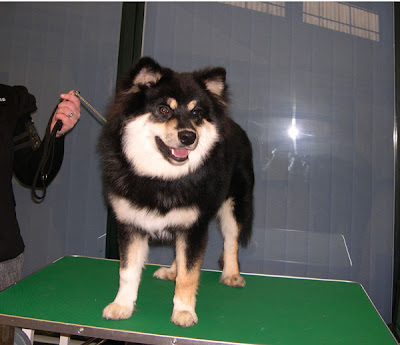 One of the hardest things about dog showing is convincing the show dog that looking at your hand is more interesting than sniffing the floor. Uh huh. 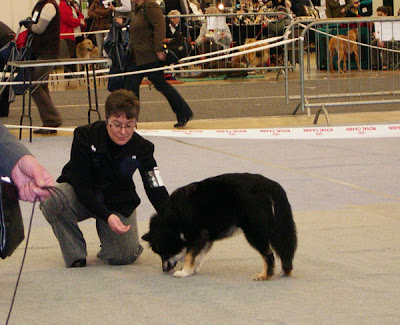 The judge was very nice to Tarkka and patient with him, which is always a bonus for your first show. However, I don't think she was a fan of the breed. It was a big Not Separately Classified class with Corgies, Lancashire Heelers, German Shepherds and the like. Neither Tarkka nor the only other Lapphund present, Kippis, placed.

At around the same time, it was a very different story at Maidenhead & District CS Open. The Inky Dink (otherwise known as Inko, LMP or her posh name, Infindigo Monta Aurinko) had a very different day under judge Mrs Jenny Miller. She placed 1st in AVNSC Pastoral Junior then was awarded Best Puppy AVNSC and Puppy Group 3. Woo hoo! Wasn't that only Inko's second show ever? I'll bet Paula flew all the way home. With a bit of luck there will be a few photos of her big day on her blog later. For now, here she is at the SFLS Lappy walk at Hankley Common a couple of weeks ago. 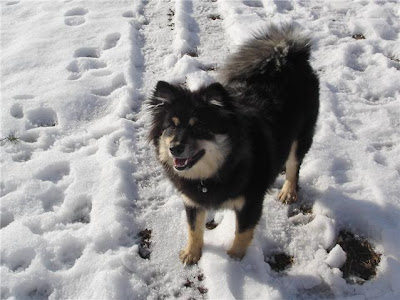 In the meantime, last week all the way up in Scotland at Coatbridge, Airdrie & District CC Open Wendy & Karhu got that special first first under judge Ms M Ross. After nabbing Best AVNSC Pastoral, he then placed 4th in the Group. Here he is with his rosettes wondering what all the fuss is about. 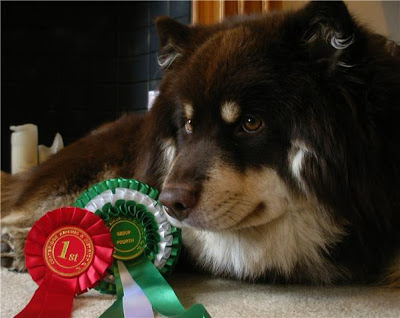 the show must not go on

So Inko went off with Paula to their first show yesterday. Paula has been brave enough to go into the ring once before with someone else's dog, so she wasn't a complete novice. However, once your own puppy makes a fool of you in the show ring enough times, you do become a bit more nervous.

On this occasion, Inko had her ups and downs, apparently. You can get the full lowdown on her blog, but the big news is that she came 2nd in AVNSC Puppy. The puppy who beat her went on to get BPIS. What a fantastic start to her show career! And now Paula has the first of what I am sure will be an enormous collection of rosettes.

As for Tarkka's first show in Wadebridge, Cornwall, it was cancelled due to - you guessed it - the weather. Several judges couldn't make it down from wherever they were coming from. Although things look quite civilised here today and as if it might rain, the yucky stuff is forecast for Bodmin Moor. You can't get to Wadebridge without dealing with the Moor.

So for more puppy show news, watch this space.
at 07:45 No comments:

let it snow some more

And while in southwest England we're 'enjoying' unusually seasonal frost, snow and ice, this is the sort of thing going on in southern Canada/northern US, as photographed from space by satellite. I just love the images they show on the NASA Earth Observatory. I mean, just look at this image of a volcano in the Aleutian islands in the north Pacific, just south of Alaska. Ok, so I know its sides are not actually red, but what a fabulous picture.

I have been the lucky recipient of a few more fabulous pictures, too, I'm pleased to announce. Can you guess who this is? 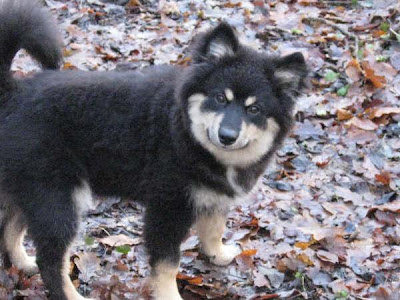 I'm thinking it could be Inko, or perhaps Neka as a puppy, Keskiyo as a puppy, a very pretty Tarkka - any of those, really. But it's none of those. Have you guessed? It is, in fact, Kaija, otherwise known as Infindigo Sulo, or "Cross". As you can see, she's still got her cross like her mum, for which she was named at birth. Here she is looking so much like Neka. 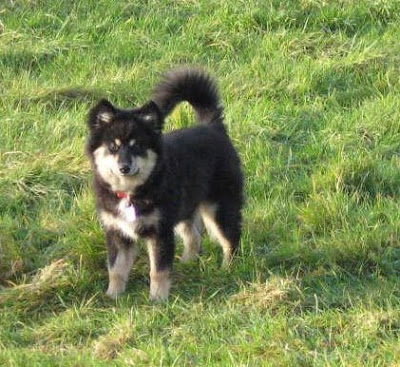 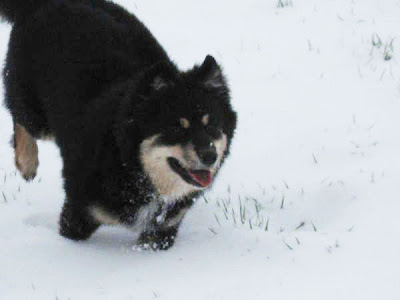 Her sister (and evil twin???) Inko, around the same time, similarly occupied: 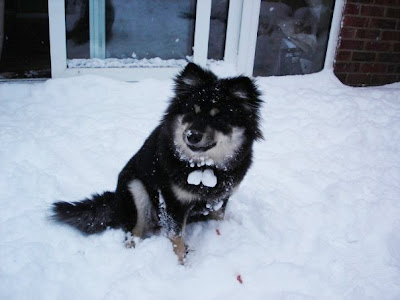 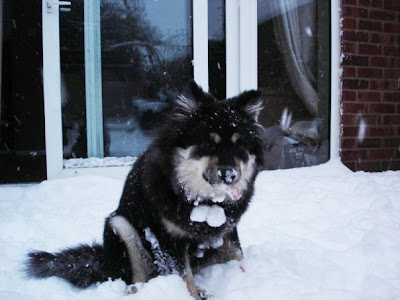 It occurred to me today that these puppies will probably be expecting snow like this every winter now, having experienced it for their very first winter. Oh dear.
at 09:00 No comments:

Well, well, well, if you live in the UK then the absolute only topic of conversation this week has been the weather (just for a change). If you're not very familiar with the UK, then you probably don't realise how little we get in the way of snow and truly antisocial precipitation. The news this week is 'the most snow for 18 years'. And it has been fun, at times, and pretty funny all the time. I'm from Canada, you see, so I say piffle to all this chaos.

And the topic of conversation among the Lapphund owners in the UK? Well, also the weather, obviously. But, more specifically, the effect the weather has been having on their dogs. And, wonderfully, there are lots of photos. (Something tells me the 2010 SFLS Calendar will be inundated with wonderfully snowy images, which have been a little scarce for the last two calendars.)

And my dogs? Well, they have been loving it. Lov. Ing. It.

The only photos I managed to get of Maija in the snow is this one of her in the middle of a game of chase with Keskiyo, followed by one of Keskiyo out playing by himself at night. 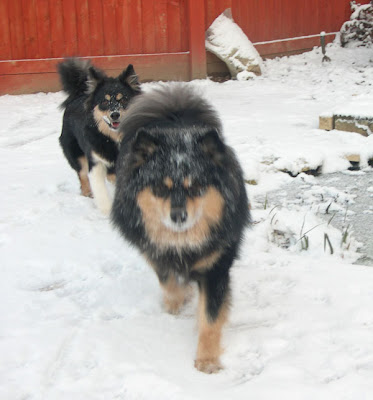 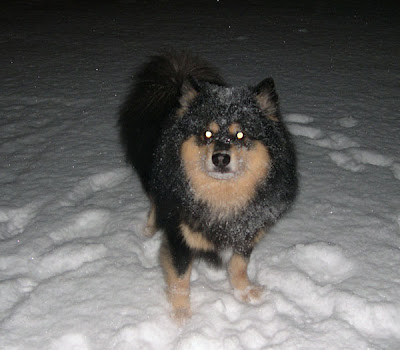 Our dogs are not the only ones having a great time. Inko has been enjoying the white stuff as you can see from her blog. I particularly like the shots of her zooming round the garden at full speed. And this is Tarkka only 20 miles south of here - with woefully less snow, but no less enjoyment. Isn't he growing up into a handsome chap? (Note the knobbly knees evident here too.) 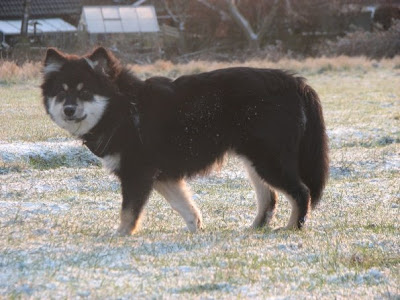 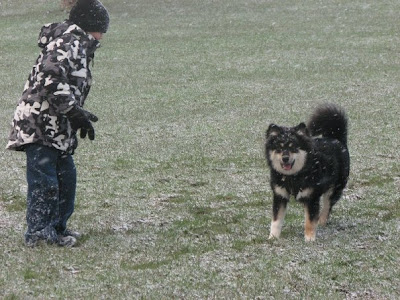 And my favorite - learning to fly? 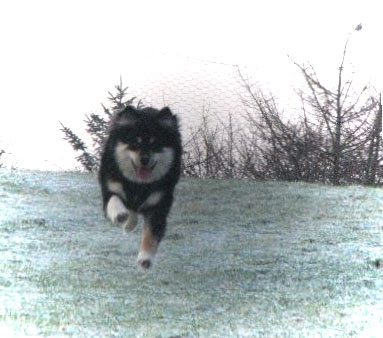 And, finally, here is the new addition to our family - my dragon, Vladimir, who I adore. Here he is snow-kissed. 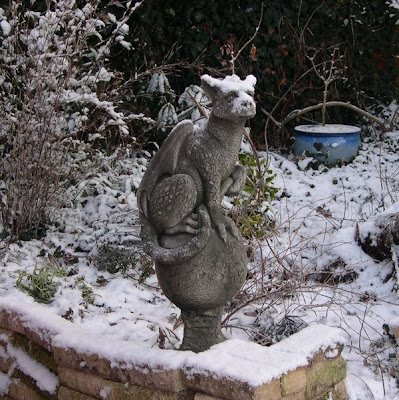