At the Welsh Kennel Club show a couple of weeks ago, I took both Tippi and Kuura into the ring in an attempt to startle them into distraction by taking them away from their owners and perhaps get them to behave themselves for the judge. That way maybe - just maybe - they might qualify for Crufts 2012.

At their previous shows they were both equally wiggly and uninclined to allow the judge too close. And as for looking at their teeth? Forget it. By taking normally naughty dogs away from their normal handlers, you can often get them to behave well just through the sheer novelty as they are too busy wondering what's going on to play naughty games.

That's how it works in theory, anyway. In practice, it didn't exactly go like that for me at WKC. Tippi moved quite beautifully away from the judge. Alas, that was only because she was determined to leave the ring altogether and go find her brother Tarkka and the rest of the family. As you might imagine, that made returning to the judge just a tad trickier.

She was more or less ok about the judge going over her, though, and did manage to qualify for Crufts by placing 3rd in Puppy Bitch and 2nd in Junior Bitch.

Kuura's turn was somewhat different. He was more than happy to trot around the ring, and he was fine with the judge going over him - even the boy bits. He took exception to showing his teeth - the traditional stumbling block for so many puppies as they venture into the show ring. But the thing that got him disqualified altogether.... that's right, I said disqualified.... was the fact that he had a slight limp.

It was something I didn't notice before going into the ring and once in the ring I blamed his slightly rocky gait on the uneven ground under our feet, as it was quite rough. However, it was obvious to everyone watching that he was actually limping and, indeed, it was obvious to me once I took him out of the ring and saw his movement on flat ground.

The absolute crunch requirement for show dogs is that they are "sound" - i.e. healthy and not limping, dagnabbit, so that was that.

The reason for the limp? He had taken a joyous flying leap from a little height while playing in a garden the day before. This is the reason why breeders bleat on about no stairs, no jumping, no leaping until Lappies are 12 months old. They are heavy for their size and as puppies, before their joints and muscles are fully developed, they can easily hurt themselves. Stopping a Lappy leaping is another matter altogether, of course.
at 17:43 2 comments:

The latest visitors are Taika & Minna who have been here almost 2 weeks and are going back home in a couple of days. That means that we have 5 dogs in total in the house at the moment. And if you wondered how many dogs is too many, then I think my limit is 5. Or possibly 4, actually.

Don't get me wrong - I have really enjoyed being over-run with canines. And these particular 2 are extremely well behaved, so they don't actually cause much more chaos than our normal daily amount. However, once you factor into the equation the fact that Jay has been almost completely incapacitated with a back problem for the whole time, you can see that I've had my work more than cut out for me. 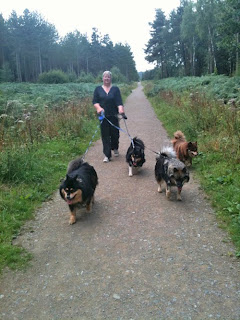 I'm pretty sure there's still one missing... on the way back to the car, and still no Neka...


Quite apart from the walks (during which at least 2 need to be kept on lead for some reason or other), at this time of the year there is the post-walk daily dog de-seeding. It's only a small exaggeration to say that we have as many seeds in our bin as are left in the woods. What we really need at this time of the year is a dog-friendly beach nearby. No seeds.

In July BF (before seeds) we had Buddy for a week and before that Kesa came to stay for a few days. 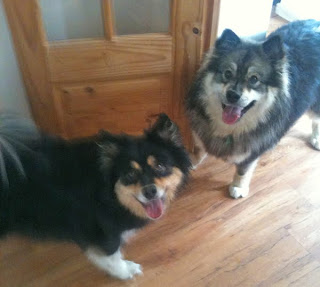 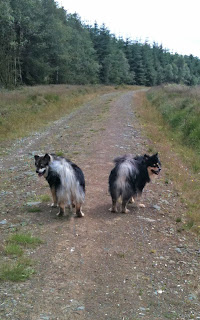 An unlikely pair of bookends


In between, the puppies and relatives went to a few dog shows. Apparently every photo we took of Keksi with her offspring at the National Working & Pastoral show was out of focus. Huh. 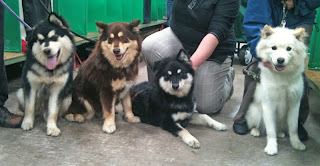 Yes, those ears, I know. I think the subject of ears deserves its own blog post.