up to no good

Some folk are blessed with baby Lapphunds who are utter and complete angels right from day one. They sleep all night right from the beginning, don't wake you too early in the morning, are instantly housetrained, never chew anything but their own toys and certainly don't dig, bark excessively or be overly attention-seeking.

No such thing as a puppy who doesn't do at least some of those things. It's puppy nature, it's normal, it's expected, I would even go so far as to say it's necessary. For example, they have to exercise their jaws and learn how to use their teeth. After all, a dog uses its mouth for most of the things that humans use their hands for, so they have to be good at it. If they chew the legs off your Chippendale table, that's your own fault. Yep, that's right. You weren't properly supervising and/or you haven't yet properly trained them to know what is acceptable to chew and what is not.*

It logically follows, then, that we are all blessed with baby Lapphunds who are little angels. Even the barking, nipping, digging, jumping and chewing ones. Normal little angels, every one.

So, do these perfect little angels ever do anything just plain naughty? Of course they do! And you can see on their faces that they just know they're not actually supposed to be doing that, but they're doing it anyway and enjoying it all the more for it's illegality. 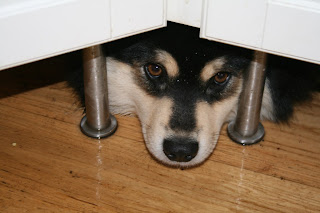 Rauhan has found himself an unusual den under the kitchen cabinets. How he fits in there is anyone's guess! 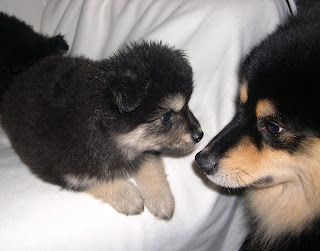 Naughty even at 5 weeks. Keskiyö telling Rauhan he's pretty sure dogs are not allowed on the sofa - even tiny ones. 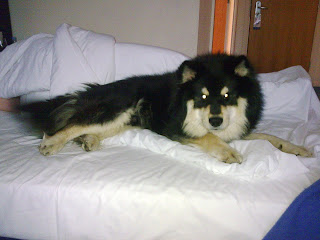 Taito thinks it's very funny to be on the bed in the hotel. 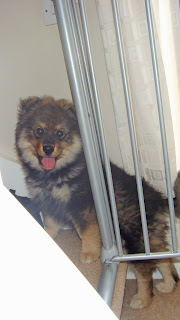 Kallio showing off how he can fit through the bars of the stair gate installed to prevent him getting upstairs. Hmmm. 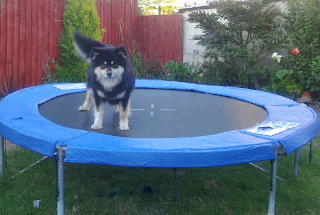 Tarkka can't comprehend why Josh gets cross about sharing his trampoline. 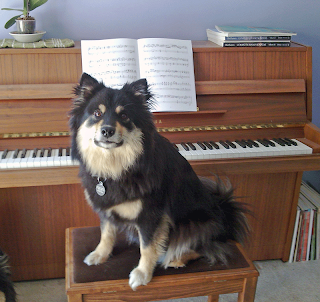 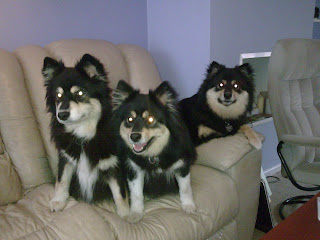 "Who did you say is not allowed on the sofa?"

You might think that with their thick, heavy coat Lapphunds would try to avoid getting wet. It has been my experience, though, that they love water. I know of a few who have learned to swim - for sport or in therapy or just by mistake after falling into deep water (Neka, Keskiyö).

I think that most would not choose to swim as a matter of course in the manner of, say, a Labrador, and ours certainly don't choose to get soaked head to tail. However, they love to paddle. Neka will playfully jump over waves in the ocean, while both Keskiyo and Maija head straight for any available river, pond, puddle or even mud.

The recent warm weather encourages even puppies to have a go. Although there is unfortunately no photographic proof, I have heard that Kesä, at only 8 or 9 weeks old had a swim in the family pool before the chemicals went in. Certainly, Keskiyö had an accidental swim in our garden pond at the ripe old age of 7 weeks, 2 days. (Incidentally, that event encouraged me to hastily remove the thick layer of pond weed obscuring the fact that there was, in fact, water underneath that seemingly solid green carpet.) 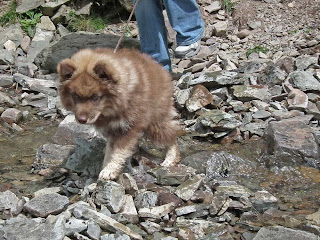 Usko trying out the stream 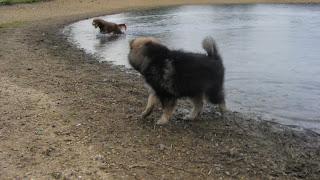 Kallio watching to see how the big dogs do it 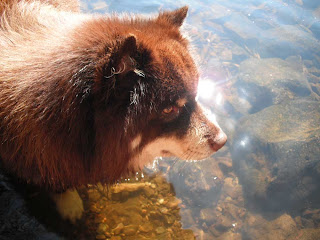 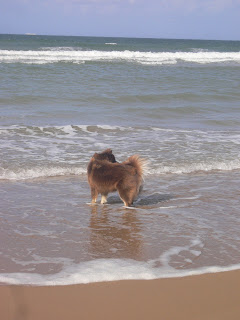 Taika on her first trip to France, on holiday 2009 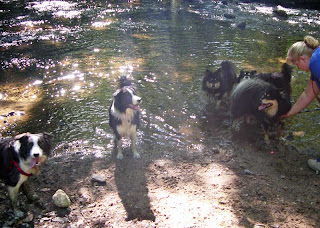 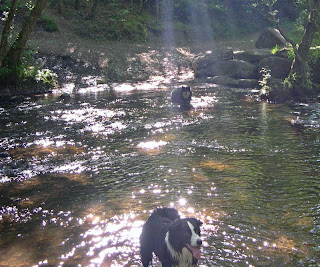 Keskiyö paddling in sunbeams with his Collie friend Kye in the foreground
at 10:54 No comments:

...to Neka's first litter of puppies who are 3 years old today.

Here's how they looked at about 4 weeks. 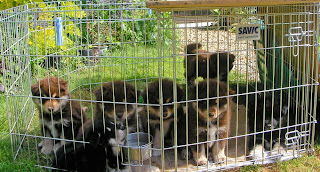 And here's how they looked on their first day with supermum Neka. 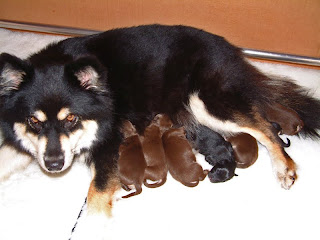 Wow, what a day we had a Southern Counties this year! It's always my favorite show and it certainly didn't disappoint in 2010. It's my favorite for a few reasons:
So, it was fun because of all the people & dogs and two lots of classes, etc. But - wow! - we did so well. In breed classes we were judged by Tuula Savolainen from Finland. Keskiyo, Keksi & Rauhan came 3rd in their classes and Inko came 2nd in hers. But it was really Taito's day, as he came 1st in Postgrad Dog and then won Best Opposite Sex.

In Rare Breeds under judge Patsy Hollings, the Lappies held their own against the Estrelas, Tibetan Mastiffs & Dogues de Bordeaux they were competing against. Again, Taito won Reserve Best Dog. Pretty good going. 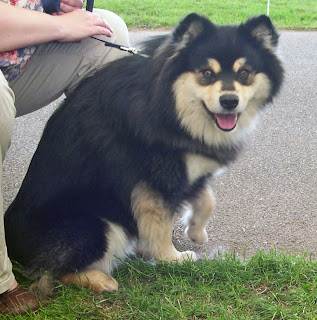 Rauhan waiting around for his class sans his normal abundant coat 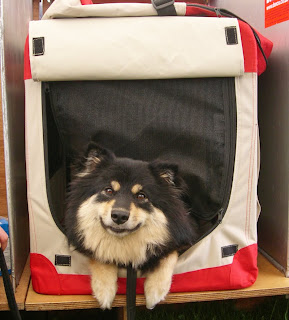 I don't often have enough Infindigo dogs in attendance at shows to enter a team of 4 for the breeder competition, but on this occasion I did, and we won that too with the team of Taito, Keksi, Rauhan & Inko (in size order).

It's a long day at these shows, and if you're lucky enough to win the FL breeder competition, then it requires fortitude to stay to the end in order to enter the winning team in the Pastoral breeder group competition. However, it's a shame to miss it, and I was delighted when everyone stayed long enough for us to come 2nd in the breeder group as well under another Finnish judge, Kari Jarvinen. What a thrill!

But next time we really must address our dress as none of us expected to be on display in the big ring that day. In fact, some of us didn't expect to be showing at all and so were dressed for a casual day hanging out with dogs in the hot sunshine. Uh huh. 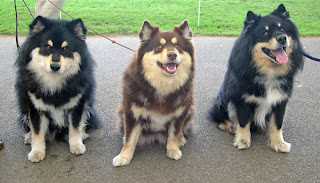 Taito (left) with sister Keksi (middle) and their sire, Kimi (right)
at 12:33 No comments:

I cannot believe these puppies have only been in their new homes 3 or 4 weeks. It seems like an absolute age. I'm sure it also feels to the puppies' new families that they have always just been there.

With apologies for the missing Kesä, here are the gang's 11-weeks-old photos. 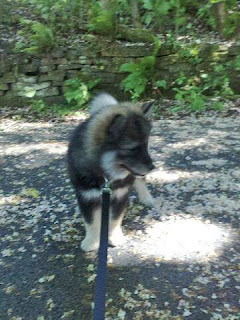 Jaana out for a stroll among the fallen blossoms 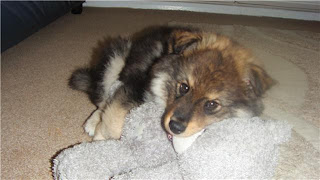 Kallio has a new bear 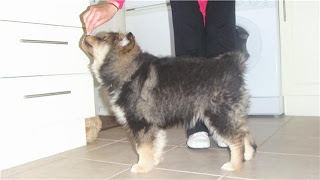 Getting very good at his show stand already! 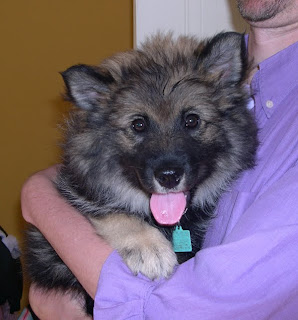 Minna having a cuddle with Jay under protest 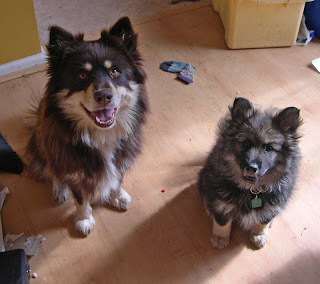 A rare still moment posing with her mum 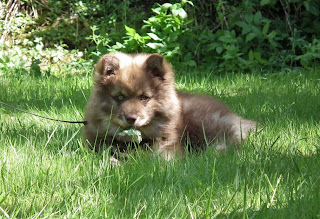 Usko helping out with a bit of weeding in the garden 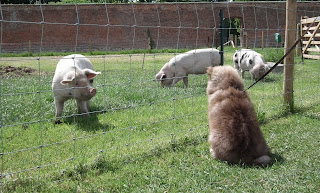 Chatting with some pigs

... the championship dog show, that is.

We had so much fun at the Bath show this year, and after two hot, sunny years in a row, it will be losing it's reputation as the Mud Bath show at this rate. It was my first champ show of the year and a classic example of why I often love going to them. Great weather, lots of dogs, lots of great folk, a chance to catch up with people you just don't get to see often enough. Brilliant.

And, to top off an already great day, Keskiyö won Best Opposite Sex to his Best of Breed half-sister, Penikka. That was a thrilling result for us after Keskiyö 's long absence from the show ring. But the absolute best part was Penikka's owner, Carol's face when she realised. Priceless. I guess it made the detour from her Cornwall holiday all worthwhile. 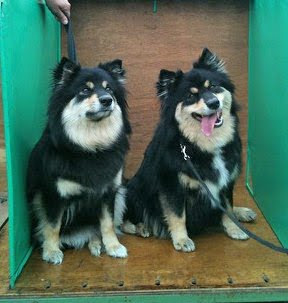 That's Inko on the left and her doppelganger sister Sulo, aka Kaija, on the right. It was Kaija's 2nd annual single show entry and she placed 2nd in a large postgraduate bitch class. Another great result, another youngster qualified for Crufts at the first attempt, and another quite amusing shocked-owner face courtesy of Jane.

Others of the Infindigo clan also placed: Taito was 2nd, Inko 3rd and Keksi VHC in their classes, and Keskiyö's son Ripa (from Neka's sister Suvi), bagged a Reserve in his class. Full results are on the Higham Press site.

While we were at the show, Maija stayed at her home-away-from-home with Taika & Minna. Since we had to pop in to drop her off and pick her up again, I did - by some miracle in all the mayhem - remember to nab a couple of pics of Minna. I was hoping to get to see Kesä as well while we were in the neighbourhood. However, getting away from the show quite late put paid to that, so I'll have to go begging for updates tomorrow.