On a number of occasions I have commented on what an amazing mother Keksi was to her puppies last year. We were all so proud of how well she did - the actual whelping, the nursing, the cleaning, the general care, the calm demeanor. The girl definitely done good. Not to mention the fact that the puppies turned out to be a pretty sweet natured & gorgeous bunch, as well.

So when I casually broached the subject with Daniel & Jim that they might be willing to allow Keksi to have one more go, they were as enthusiastic as I. Can't say how grateful I am to them for their continuing support & help - not to mention the loan of their sweet girl and the breaking up of their canine family for weeks on end. Oh, yes, and having to endure bitches in season combined with a certain teenage male dog...

And so the crucial moment came around again and this time our rendezvous was with a local boy who lives conveniently just a few hours up the M5 from me. But travelling for mating purposes is never that simple for me, somehow, as you will be aware from my past exploits as reported on this blog. On this occasion I wasn't plagued by strikes like last time, and we weren't under threat of the worst snow storms in absolutely years like I was with Taika's mating trip. However, as I drove north to meet with Jim & collect Keksi, it did indeed start to snow, and it got heavier & heavier. I had visions of a repeat of the awful weather we endured getting to and from France wtih Taika, but luckily the busy little flurry ended and the accumulated snow started to melt pretty much immediately as I waited in the car park of the Air Balloon pub for Jim & Keksi. 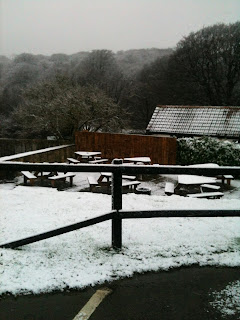 Whilst on the subject, I recommend this pub. It's pleasingly picturesque inside & out, it has a very friendly & welcoming landlord, and it's conveniently situated a few minutes off the M5, just south of Cheltenham, more or less on the edge of the Cotswolds. And although we didn't stop to eat, the menu looked very nice too.

So off Keksi & I went to deepest Shropshire to visit Liz, Ian & Usko in between visits to Glenchess & Elaine & Steve Short's delectable Ilolas. 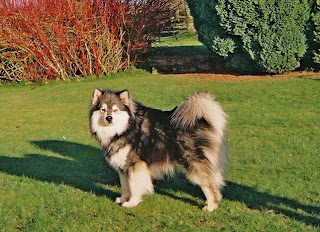 Looking very pleased with himself. And quite right, too. 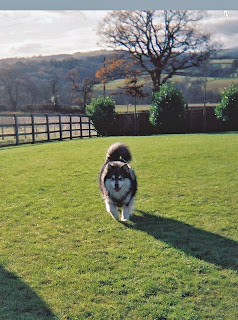 Having a scamper around. 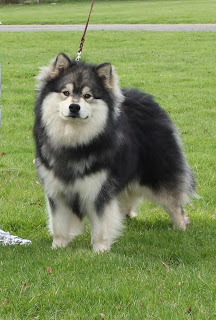 
I have been in love with Ilo since first laying eyes on him as a young puppy. Not only is he a beautiful dog with a wonderful coat, color, head & expression, but he has one of those fabulous sweet natures that I so admire.

And no wonder, considering who his parents are. His father is the top winning Danish dog Multi Champion Lapinlumon Elämänilo. His mother is another little Lappy I have liked since first seeing her in Helsinki when Elaine was collecting her. Her name is Terhakan Uunu Leenu, and she's still a little beauty. 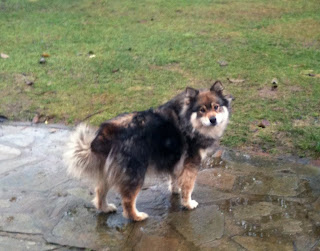 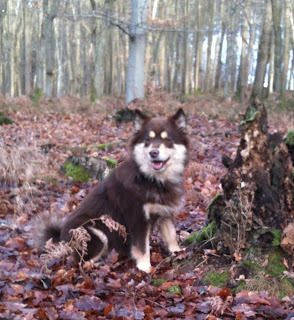 Not to mention being the centre of attention with no competition for cuddles. 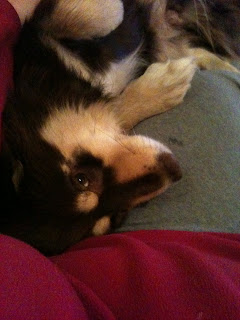