The Pippuri puppies are almost 3 months old and growing fast.  Pretty soon they will be sprouting new adult teeth into jaws not quite big enough to hold them yet (and the chewing will ramp up - yes, it does get worse before it gets better!)  At the same time, their legs will shoot up and their noses will shoot out.  Do you get the impression it's not a very attractive phase?  At some point soon their ears will go up too (one hopes).


And, finally, a little video of Tito having fun with the boys his first time at the beach.

Meanwhile, the extended family visited last week, and Jaana, too, is growing up. 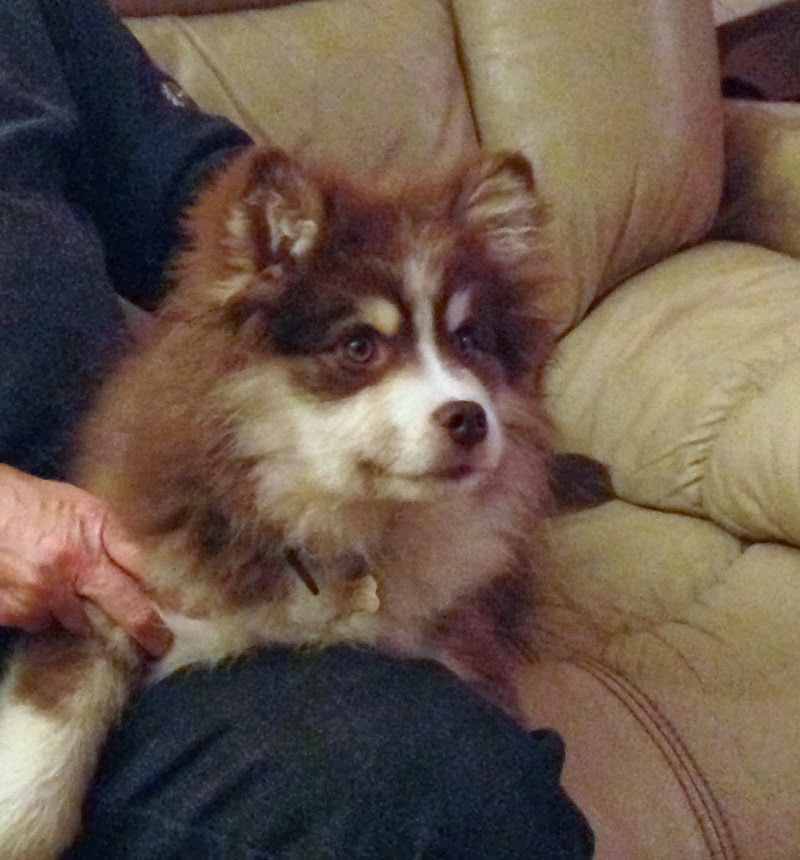 A few months ago, after 14 years of excellent health, Gink started to show signs of being unwell.  He was diagnosed with severe diabetes and we duly put him on a special diet.  With Gink there was no question of going down the insulin injection route everyday - whenever faced with something he disapproved of, he would simply move out!  So we made the decision at that time to give him as much quality time as he had left without putting him through any kind of stress just for the sake of a few extra months.

He was a terrific cat who first came into my life when Lenny, who was then about 10 months old, brought him home one day.   He had no microchip and no collar and was about the same age as Lenny.  I waited for him to go back home, but he never did.  In the end I started to feed him and he duly moved in with Lenny and I.   When a few months later I moved, Gink came with us and stayed ever since.

But only just.  He was one of those cats who would quite happily mosey into other people's houses, if given a chance.  I don't know if he ever went through anyone else's cat flap, but it wouldn't surprise me in the least if he did.  He certainly had to be rescued out of people's garages from time to time.  More than one neighbour over the years threatened to keep him, as he regularly visited them and they were so taken with him.  That's when it occurred to me that I had originally gone off with someone else's very friendly, very disloyal cat!  Oops.


He clearly had several stops on his neighbourhood rounds where a tasty snack could be found.  As a youngster he was diagnosed with urinary tract disease which was controlled throughout his life by a special diet.  In spite of this, he was known as a big cat - very big.  And by "big" I mainly mean "fat", thanks to his many admirers.

In recent months he stopped going outside much and he steadily lost weight until he was half his original size.  When he stopped eating and drinking we knew it was time to make that difficult decision, and so today we said goodbye to him.

I will miss him on the end of the bed, taking up all the space.  And I will miss the way he would demand food in the mornings, even though there was always food in his bowl.  I will miss him sunning himself in the garden in the summer - and I'm sure the dogs will too.  Who will they chase and poke now?  And in the evenings it will be strange not to have him rolling around on the stairs, scratching the carpet to shreds.

He recently took exception to the water in his bowl.  Thinking he didn't like metal bowls, we got him an earthenware one - after all, who likes to drink out of metal?   But apparently all this time he actually preferred to drink from glasses.  We'd rather not think how long he was drinking from Jay's water glass at night before we caught him red-pawed...