When you show dogs there are ups and downs.  Even if your dog is not exactly a great match for the breed standard that judges should be working to, you will have a few exciting moments at shows.  Even if your dog is an outstanding example of the breed, you won't always win.  That's the way it goes.  I tell everyone who starts out in showing that you need to be a good loser and you need to enjoy it whether you win or not.  Because, the truth is, you will rarely win.

Occasionally a dog will come along who is extra-special in terms of showing.  They will be a great example of the breed, sure, but they will also love being in the spotlight, have someone willing and able to train them to perform as expected, and someone to take them to shows.  Lots of shows.  I have had all of that with Ulla.  She's a sweet-natured, high-energy, clever little sweetie-pie with owners who did a terrific job of training her and who are committed to keeping her fit and well groomed and are kind enough to let her be my showdog.  And in my 15 years of owning, breeding and showing Finnish Lapphunds, she has given me most of my greatest thrills in the showring.

There are different levels of winning, too.  There are the open shows where you may or may not get a judge who is knowledgeable about the breed - or even likes them! - and you might not even have specific breed classes.  There are the championship shows where the top winners keep on winning and, under the UK system, other dogs who are still excellent representatives of the breed and worthy of the title of champion unfortunately never reach that pinnacle because they can rarely get past the top winners.  Then there are the special shows, of which you might get two a year, if you're lucky.  In Finnish Lapphunds, there are 3 such special shows each year for me.  They are Crufts in March and the two shows where we get Finnish judges every year:  Southern Counties in June and the Finnish Lapphund Club of Great Britain championship show in April.  I always like to make sure I get to those shows, at the very least, because it's always good fun.  Even better fun when you don't already have a good idea what the judge likes and who they will choose.

My biggest and most exciting show win in 15 years of participating happened 2 days ago at the FL Club of GB champ show.  In an entry of 91 dogs under one of our kindest, funniest, most entertaining and enjoyable judges ever, Mr Juha Kares from Finland, Ulla won Best in Show.

She first won her Limit class in tough competition.  There was even a final, nail-biting run-off with the second place winner.  She then went into the lineup against all the other bitch class winners.  She was looking so good and moving so well that as I stood there I had a brief hope she just might get the Reserve CC.  When the judge gave her the CC, I admit to being rather overwhelmed and tearing up a bit.  The great roar from the spectators was incredibly moving.  No one got a photo of my face at that moment, but one of the few clear memories I have is making the shocked-face emoji in real life with bugged-out eyes, open mouth and hands to face.  Then this happened.  I look just a bit thrilled, and it's so lovely to have these photos of that moment, thanks to Sally McKinlay.

Outside the ring, gathering my wits and waiting for the Best in Show challenge with the Dog CC winner, there were so many hugs and congratulations and genuine well-wishes.  I was still a bit stunned.  One friend asked me if I was going to be able to pull it together for the challenge.  My reply was (something along the lines of ) ab-so-flipping-lutely!  And so I did.  Unfortunately I can't remember the judge actually awarding Ulla Best in Show, nor the cheering that I know erupted when she did.

And then I stood outside the ring, still a little teary, accepting congratulations and watching, rather dazed, the challenge for Best Puppy in Show and Best Veteran in Show.  I had recovered pretty well, and I thought I was holding it all together pretty well.  But the thing that completely "did for me" (as I believe someone commented at the time) was Ulla's mum, Emmi, being awarded Best Veteran in Show.   To do so, she had to beat the lovely Special Vintage Bitch and the top-winning Best Veteran Dog.  Jane's face says it all!

These wins were all the more special because Ulla's sire, Ch Lecibsin Salo of TabanyaRuu JW ShCM, also won his first CC and Best Opposite Sex in Show at this same show 5 years earlier.   The family resemblance between Ulla and her special dad made for an emotional day for a lot of us.


Here are a few of Ulla's top wins in her career to date:


At some point the full results should appear on the Club website here.

The judge gave Ulla the most lovely critique I've ever read... but I can't reprint it here until it has been published in the dog paper.  Watch this space.  But it said, among other things, that she was perfect and that he loved her.  Well, who wouldn't! 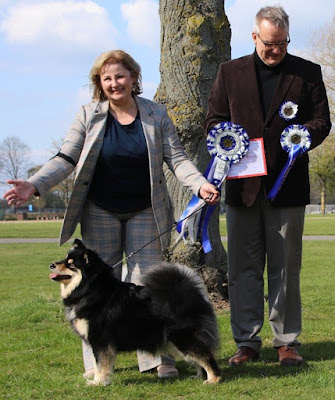