In February the Riemu puppies turned one year old and Jane sent me this wonderful piece all about Emmi's first year.  It was first published in the Spring 2013 edition of Lappy Tails, the newsletter of the Southern Finnish Lapphund Society.

Emmi – A One Year Old

Despite being told by lots of Lappy people that once we had one Lappy we would want more we were convinced that we would stick with our one, Miika. Of course, seasoned Lappy lovers knew better and last April we introduced our newest family member, Emmi (Infindigo Riemu Emmi).

Today we are celebrating Emmi’s First Birthday and what a fabulous year it has been.

As we do not live too far away we were fortunate that we could visit Jennifer, Jay and the Riemu puppies a few times after they reached four weeks old, also Jennifer posted a daily blog so we were able to watch them develop.

Finally the day came for us to drive to Devon to bring Emmi home. Emmi and her sister, Tiia, were the last puppies to leave the nest and when we arrived they were having a vocal competition which didn’t seem to stop the whole time we were there. Fortunately once home Emmi soon realised that being noisy was not going in her favour and now only barks when she needs to let me know that someone is coming to visit.

We tried to take Emmi’s introduction to Miika slowly by letting him into the garden before bringing Emmi into the house, letting Emmi wander around and then putting her in her crate before letting Miika back in to say hello. Unfortunately Miika instantly knew we were up to something and wouldn’t move away from the back door and so was watching and twitching to get in. As soon as Emmi spotted Miika she was desperate to get to him so we let her out of the crate and they have been best friends ever since.

Emmi is the sweetest little girl; she loves people, children, dogs and other animals equally. It is lovely to watch Miika and Emmi playing although they can a little carried away with their game at times. However, it is equally heart lifting when you see them snuggled up together having a nap. Sometimes Emmi travels to Bristol with me visiting clients and loves going on the Park & Ride Bus especially when the other passengers make a fuss of her.

Emmi wants to please and tries very hard to do what we ask of her which has been very useful in the Show Ring.

Once Emmi was four months old she started Ring Craft classes; she entered her first show at six months. At this show Emmi worked very hard and was given 2nd place. Since then she has entered lots of shows – Emmi seems to really enjoy showing especially when the judge gets close to examine her, and even going so far as to give him/her a sneaky kiss! Emmi is very food orientated which can be a bonus when training but can also cause a bit of problem in the show ring as sometimes she is head down looking for any free treats left behind by the previous dogs in the ring instead of trotting nicely. In her puppy year Emmi’s best achievements in the ring were: 7 x Best Puppy in Breed, 5 x 1st place, 4 x Pastoral Puppy Group 3 and even a Pastoral Puppy Group 2. Such proud parents!

Here is Emmi being examined by the Group Judge at the Welsh Kennel Club Open Show where she was given the Puppy Group 2. 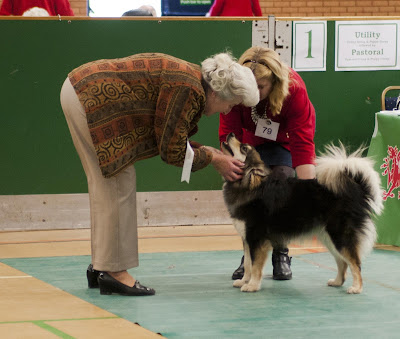 We try to attend Lappy Walks whenever we can. Emmi loves these walks – in fact she was so excited when we arrived at the New Year Lappy Walk at Pullabrook Woods in Devon in January that she leapt out of the car and fortunately landed in Mark’s arms! Emmi is very good off-lead and it was wonderful to watch her “running the line” of walkers through the woods. 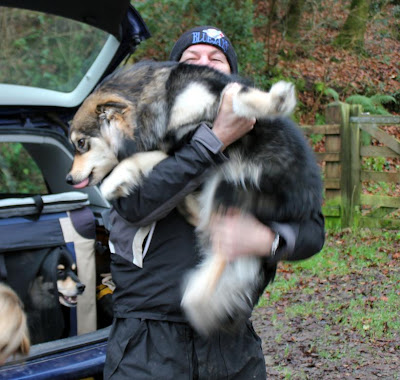 We often walk on Weston Beach too; on one of these walks Miika and Tuuli decided to gang up on Emmi and rolled her in the wet sand until she was wet through and covered from head to toe in sand - she loved every minute of it! 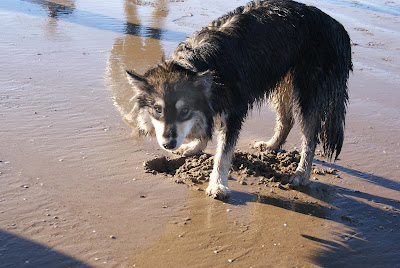 Emmi also attends a Dog Training Club each week working towards her Bronze Good Citizen Award. She passed her Puppy Foundation Course in the summer. She picks up the training very quickly and even pre-empts the next instruction so now we have to make the training a little more complicated and mix it up so that she learns to wait for the next command rather than think she knows what it will be. In December the Club held a Christmas Party. We played games with the dogs, had a buffet and raffle and then a Fancy Dress Competition – of course there was only one character that Emmi could possibly go as – Princess Bride. Here she is in her pink tutu and veil. 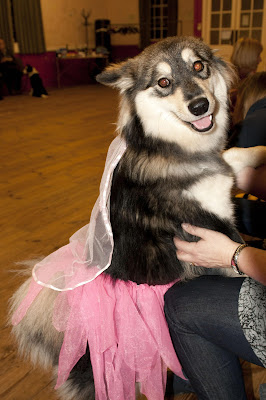 So Emmi is now a One Year Old, technically no longer a puppy but she is a Finnish Lapphund so thankfully retains those fabulous puppy traits that make this breed so lovable.

Emmi has brought us so much love, joy, fun and laughter and we are over-whelmed with love for her – our precious, beautiful princess. We will be eternally grateful to Jennifer and Jay for trusting us to take care of this super little girl.