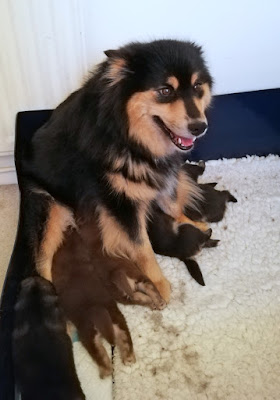 I have to say, these puppies look enormous to me.  They feel fat & heavy & very cuddly.  Don't ask me why - I have no idea why I have this perception, because apparently it's not true!  The numbers don't lie, and as you can see from from nerdy charts below, it seems that these puppies are extremely average in size and weight (if extreme average-ness isn't an oxymoron).

In other news, the puppies have been wormed for the first time.  That never goes down well because it's a liquid and they tell me it tastes terrible.  As proof, you can see their uncles from Tuuli's first litter being wormed at the same age here.

This time I tried Drontal wormer instead of the Panacur I normally use.  I do believe the puppies tolerated the terrible taste more readily than others have coped with Panacur in the past.  I was slightly concerned as the Drontal is obviously a stronger drug, because you only give it once whereas the Panacur you give once a day for 3 days.  However, there have been no apparent ill effects, and it can only be a good thing for them not to have more than one day of it at a time.

And here are the weights.  The puppies were weighed twice a day for the first week and then daily for the second week.  From now on they will only be weighed weekly.  The first table shows their weekly weight followed by a chart showing the same information in diagram size; and they are all extremely close.  The last chart is my litter average weight comparison chart.  See - I told you it was nerdy. 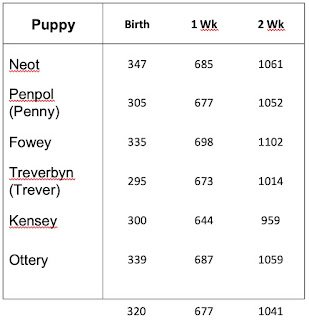 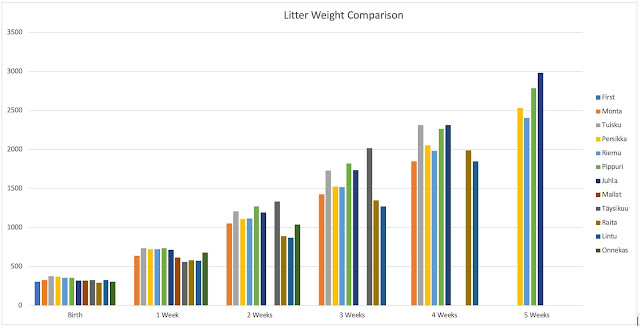 If you're having trouble seeing the images, you can click on them for a larger size.