the grooming of a reluctant Lapphund pt 1

I don't do smelly dogs.  One of the appealing features of Lapphunds for me has always been the lack of typical doggy smell about them.  Even when they're wet they are not particularly offensive.  So when one of the gang in my house gets a bit whiffy for any reason, off he or she (usually she) goes to the bathtub.

Granted, my dogs only get bathed about once a year because - and this is another of the very convenient Lappy features - they don't need frequent bathing.  In fact, I know some Lapphunds who have never had a bath in years of adulthood.  Grooming, yes, spot-baths, yes, but full-body baths, no.  And they are gorgeous paragons of immaculate perfection.

When Taika hopped out of the car to greet me, I thought I detected a faint hint of fox about her.  And that meant that she was doomed for a bath.  It's very possible that she hadn't had one since she was last in my bathtub after her puppies were born a couple of years before.  I knew that my work was most definitely cut out for me.

If ever there was an argument for NOT neutering your dogs, the change in coat texture is definitely a convincing one.  When Lapphunds are entire, their coats are thick and long, yes, but they are coarse and easy to manage.  And, if all else fails, almost all the coat falls out at least once a year, and usually twice, so you get to start over again regularly.

After neutering, Lapphund coats become heavier, longer and more woolly.  And they just don't moult in the same way or with the same regularity or thoroughness.  Some individuals are more prone to this than others, of course.  Neither Neka nor Maija were blessed with particularly luxuriant coats to begin with and so after spaying they remain relatively easy to maintain.  Taika, on the other hand, has the most extreme case I've seen yet of any of the neutered branch of the Infindigo family tree.  Her coat is bountiful in its abundance.  Or, in other words, there's way too much of it.

It's not overly long, really, although it definitely is rather long.  But it is unbelievably dense now.  The undercoat is so thick it's difficult to part it sufficiently to see her skin.  And the fur on her belly has the harsh, wiry texture of steel wool - incredibly difficult to brush. 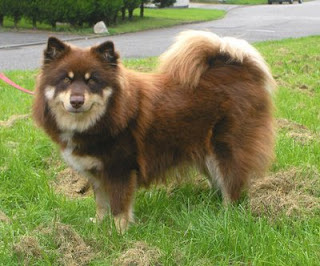 This is Taika at about 2 years old, before puppies and spaying.  Even in those days she had the steel wool belly, though. 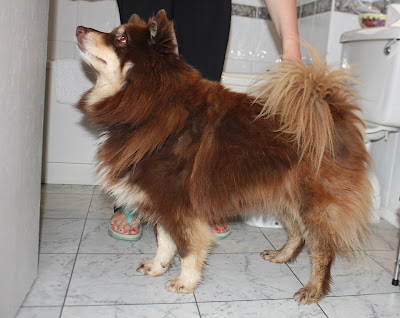 And this is how she looked on her way into the bath.  You can sort of see how long and thick the fur around her neck and shoulders has become. 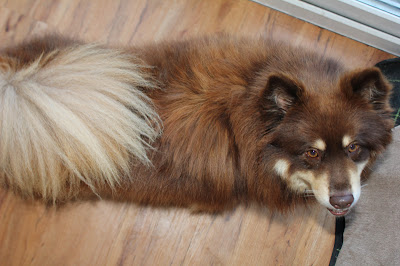 From the top you get a slightly better idea - under there is a relatively small dog.  Believe it or not. 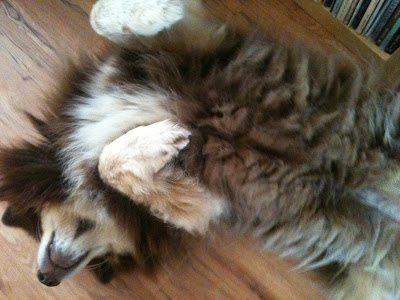 This belly would have no problems keeping warm during a Finnish winter.

I was assured that Taika absolutely hates being brushed.  As a friend of mine on Facebook said, not liking being groomed is not an option in this house.  But I can see how a dog as well behaved and easy to live with as Taika might get away with murder on some matters when she puts her mind to it.

Lapphund youngsters are all likely to put up a bit of a fight when it comes to being groomed.  It goes with pushing the boundaries and trying to command a little independence as they mature.  I always tell everyone that when it comes to battles of will over anything with their growing puppy, they must always win (the people, not the puppy, that is).  That is the way to ensure that your Lapphund grows up to enjoy being groomed - or at least to be willing to put up with it.

If Taika was going to be difficult to brush, then I was pretty sure she wasn't going to approve of going into the bathtub either.  But, you know what?  She wasn't that bad.  I am firm and matter of fact when it comes to complaining Lapphunds, and so, apart from a few dirty looks, she just let me get on with it once she realised I wasn't going to give up. 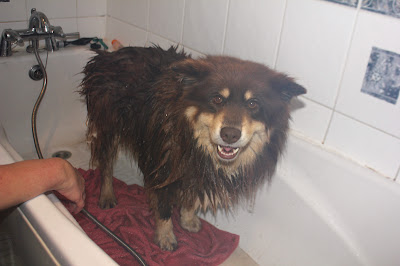 Standing on a towel to minimise paws slipping on the slick enamel. 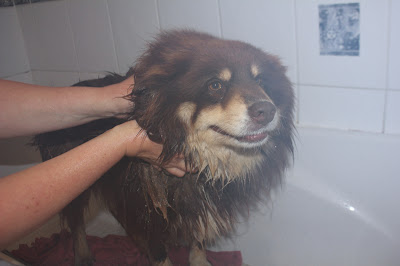 I tend to wet, shampoo and rinse in sections, starting with the belly and legs, moving to the rear end & tail, body & back, then the neck. 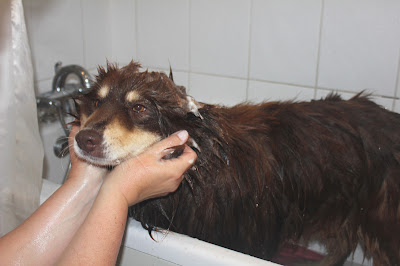 I always do the head and face last because it is the wetting of the head that makes shaking absolutely irresistible for dogs.

Careful rinsing around the ears to make sure that no water gets in there. 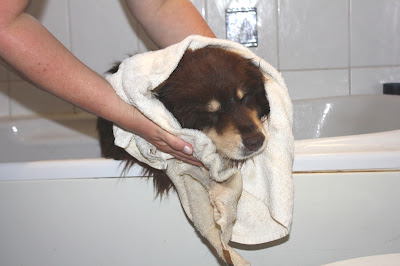 A bit of towelling off before getting out to minimise the mess from shaking! 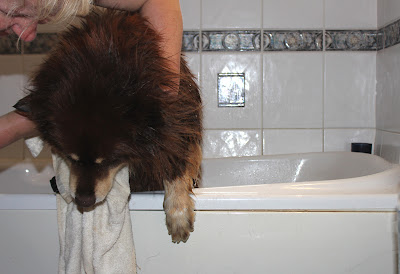 Careful climbing out as it's very slippery under the paws. 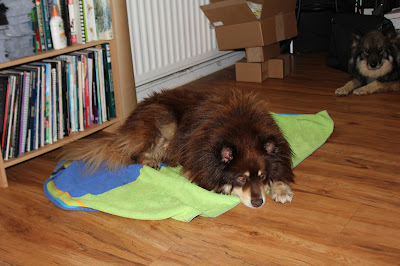 Downstairs again to dry off and do a bit of sulking.

It took 2 days for that coat to dry thoroughly for a good brushing.  The brushing was an event by itself, so deserves its own post.

Tomorrow - how to bathe a Lapphund - the unabridged step-by-step version.