That's right, I said ugly. You don't believe me, do you? I know I've said once or twice that puppies don't come in ugly. I've probably even said it on this blog. But I lied.

It all depends on the age of the puppy. And the breed, no doubt. There are very few puppies cuter than a Finnish Lapphund at the age of about 3 weeks to 15 or 16 weeks. (Ok, possibly these Shiba Inus. Beware this is a time-sensitive link to a webcam which is currently showing the most adorable little red Shiba puppies about 5 or 6 weeks old.)

Here is Viivi at 12 weeks, for example, in her usual position cuddled up with Jaska. Cute as a button, no? 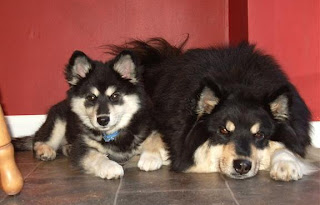 And here is Maija at a similar age doing a like-father-like-daughter at the kitchen door. It's illegal in our house for dogs to actually enter the kitchen, but they do lie with front paws only over the threshold in the hope of being tossed a piece of cheese or, prize of prizes, a slice of green pepper. 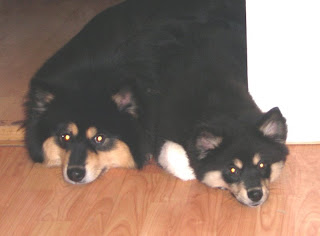 And in a few days the puppies will be 16 weeks old. A full 4 months old at the end of November. Is that really all? It seems such a long time ago I had 9 of them here. And like everyone who gets a new puppy, I can't believe Maija has been with us such a short time - she's definitely an integral part of the family now and it's difficult to remember what it was like around here without her.

As there are few things cuter than baby Finnish Lapphunds, so the same dogs at the age of 4-5 months are barely fit to be seen in public. Those of us who are interested in the world of dog shows despair at winding up with such an ... unattractive specimen. Witness my beautiful Neka at the age of 4 months: 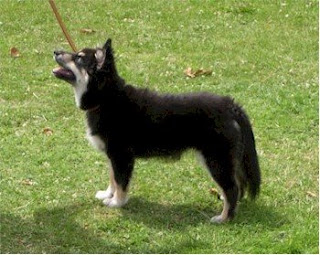 Shocking, isn't it? Gangly, skinny, big of ear and long of muzzle. Barely recognisable as a Finnish Lapphund. And so, even Neka's puppies, these most gorgeous of baby Lapphunds, are going through their ugly stage now. Maija's teeth are falling out much faster than the new ones are coming in, and I'm reaching the stage where I wonder if she'll ever grow into her ears. 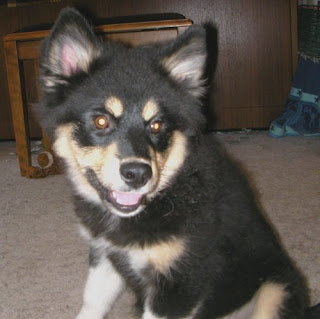 And speaking of gangly... Tarkka came to visit yesterday. He is shooting up and is now all out of proportion with a long muzzle, head too big for his body and body too short for his legs. But, even in the throes of their ugly stage, I have to admit they're still pretty sweet. Here they are after exhausting themselves playing like maniacs. 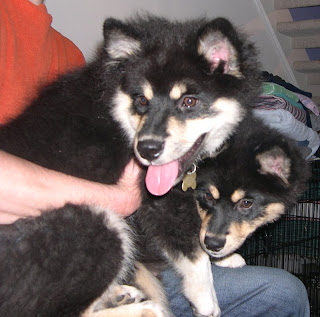 BTW that's Tarkka on top - they're still so similar it's difficult to tell them apart when they're just a bundle of puppy rolling around the floor together. But Tarkka is noticeably bigger now so the similarity will likely become less marked as time goes on.

So, we all go through our puppies' ugly stage and hope that when we get to the end of it they will have turned into the beautiful dog we hoped for. Guess what? They always do!

To every rule, there is the exception, of course. Very occasionally there comes a Lapphund who is as beautiful at 5 months as they are at 3 months and as they will be at 3 years. They just don't grow through that skinny, leggy phase. They sail through adolescence without being touched by the ugly puppy syndrome. Who could be so perfectly formed? 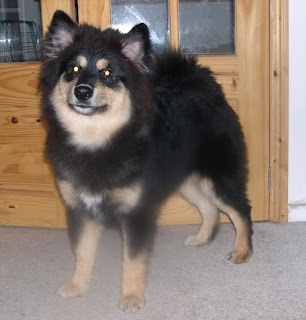 Perhaps not the model of Lappy perfection that he is now at age 2 1/2, but Keskiyo didn't have many faults at 4 or 5 months of age. But, then again, some might say he never really grew up!
at 15:46

OMG Tarkka is the image of his mum I skimmed through the photo's before reading the texted and thought when did you take that photo of Tarkka only to read it's his mum, and yes with hair and teeth falling out & legs & ears that really don't look like he will ever grow into I must confess to sitting here nodding my head reading the blog.